(CNN) -- The Sri Lankan army launched an operation against Tamil rebels in the country's north early Monday, the military said, claiming to have rescued thousands of civilians trapped in a government safe zone. 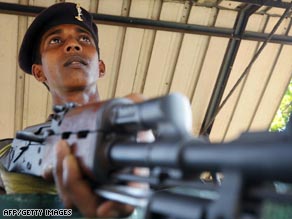 The Sri Lankan army has relaunched its attacks on Tamil rebels in the country's north.

The government of Sri Lanka has been battling the Liberation Tigers of Tamil Elam (LTTE) rebels in a civil conflict that has lasted nearly 25 years.

"Thousands of civilians who had been forcibly held by the LTTE terrorists in the government declared No Fire Zone (NFZ) were rescued early hours this morning, 20 April, as the troops engaged in a massive scale rescue mission, were able to open a safe passage for the civilians," the Ministry of Defense Web site said. More than 10,000 civilians are trying to seek refuge with soldiers, the military said.

The upsurge in hostilities follows a two-day cessation last week for the Sinhala and Hindu New Year.

The U.S. State Department on Thursday called for a cease-fire between the Sri Lankan government and Tamil Tigers to allow civilians to escape the fighting.

"We call upon the government and military of Sri Lanka, and the Tamil Tigers, to immediately stop hostilities until the more than 140,000 civilians in the conflict area are safely out," acting spokesman Robert Wood said in a statement. "Both sides must immediately return to a humanitarian pause and both must respect the right of free movement of those civilian men, women and children trapped by the fighting."

Watch the heavy toll of fighting on civilians »

A brief cessation of hostilities announced by the Sri Lankan government on April 12 allowed the United Nations and its partners to bring in aid, but a renewed government offensive has left civilians trapped in a war zone.

U.N. Secretary-General Ban Ki-moon and his humanitarian chief John Holmes called the brief halt in fighting inadequate and have pushed for a longer humanitarian pause in fighting.

The most pressing concern now, according to Holmes, is the fact that more than 100,000 people are crowded in a "very small pocket of land" that is about five square miles, or about twice the size of New York's Central Park.

"It is a very small area indeed for what we believe is a very large number of people," Holmes told reporters Wednesday.

Overcrowding is also a problem in camps housing displaced people, according to the United Nations Children's Fund (UNICEF). As of Monday, some 65,000 displaced people were crammed into camps in Vavuniya, Jaffna and Mannar, with 35,000 more expected to arrive within 48 hours, the organization said in a statement. '

UNICEF said it feared for children trapped in the escalating fighting and is worried that the worst is yet to come. The group appealed for donations to help cover "the most immediate needs of the affected population in health and nutrition, water and sanitation, protection and education."

The crowded population, primarily comprised of Tamil civilians, is subject to the continuing Sri Lankan government assaults. The British and French foreign ministers released a joint statement as well on Wednesday, saying that the Tamil Tigers are using Tamil civilians as human shields.

The Tigers have been declared a terrorist organization by 32 countries, including the United States and the European Union. As many as 70,000 people have been killed since the conflict officially began in 1983.

The International Committee of the Red Cross said Monday that it has helped evacuate more than 10,000 sick and injured patients, and their caregivers, from Putumattalan in rebel-held territory since February.

"These evacuations have saved many lives," said Morven Murchinson, the Red Cross medical coordinator in Sri Lanka. "It is vital that they continue, because more sick and wounded people are arriving every day at the makeshift medical facilities in Putumattalan."

The Red Cross says there's an acute shortage of medical supplies in the region, which it is trying to rectify.

All About Liberation Tigers of Tamil Eelam • Sri Lanka