ISLAMABAD, Pakistan (CNN) -- The Taliban in Pakistan have issued a direct challenge to the legitimacy of the Pakistani government, by declaring the country's entire legal system "un-Islamic." 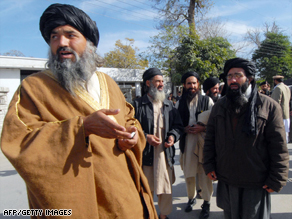 Taliban representatives leave talks in Peshawar in February after reaching a deal on Sharia law in Swat.

"Let the judges and the lawyers go to Islamic university," said Muslim Khan, a Taliban spokesman in Pakistan's Swat Valley. "(After) they learn Islamic rules, Islamic regulation, they can continue to work."

In a telephone interview Tuesday with CNN, Khan demanded the imposition of Islamic sharia law all across the country. He also called for the creation of jaziya, an Islamic tax, to be levied on all non-Muslims in Pakistan. And Khan denounced any Pakistanis who disagreed with his interpretation of Islam, calling them "non-Muslims."

The Taliban militant echoed statements made by Sufi Muhammed, an Islamist fundamentalist leader who helped broker a peace deal between the Pakistani government and the Taliban in Swat Valley.

Last week, the deal led to the implementation of sharia law in Swat, an alpine region that was once one of Pakistan's most popular destinations for foreign tourists.

Speaking before an audience of tens of thousands on Sunday, Sufi Muhammed declared democracy and Pakistan's judicial system "un-Islamic."

Since reaching his peace deal with the government in Islamabad, Muhammed has been appointing qazis, or clerics, to serve as judges in Islamic courts in Swat.

The rise of the Taliban in Swat has alarmed and frightened some members of local civil society there.

"This is a time bomb for the country," said Aftab Alam, the head of the lawyers' association in Swat district.

Speaking by telephone from the town of Mingora, Alam claimed Taliban militants have kidnapped, ransomed and even killed lawyers in recent months.

This week, some secular Pakistani political parties publicly condemned the Taliban's strict interpretation of Islam. But many other prominent officials appear unwilling or unable to challenge the creeping Taliban conversion of Pakistani society.

For example, Ali Ahmed Kurd, one of the leaders of the lawyers protest movement which helped bring down the government of military ruler Pervez Musharraf, declined to comment on Tuesday when asked by CNN about Sufi Mohammed's comments.

In recent months, videos have emerged showing what appear to be Taliban militants in Swat meting out vigilante justice.

One video shows men beating a woman accused of adultery with a cane. Taliban spokesman Muslim Khan initially claimed responsibility for the public caning in interviews with Pakistani TV stations. But in his interview with CNN on Tuesday he reversed his position, accusing "opponents of Islam" of making fake videos to hurt his movement's image.

Meanwhile, in another Taliban-run region called Orakzai, details emerged of militants forcing a small community of Sikhs to pay a jaziya or "minority tax" of 10.5 million rupees, roughly 18,000 dollars earlier this month.

During his interview, Taliban spokesman Muslim Khan said that if his vision of an Islamic society is fulfilled in Pakistan, terror mastermind Osama Bin Laden will be welcome to travel and live openly here. "Sure, he's a Muslim, he can go anywhere," Khan said.

Khan added that he would like to see sharia law implemented beyond Pakistan, even in America, a country he knows intimately. For four years, the Taliban spokesman lived in the United States, working as a painter near Boston.