(CNN) -- Details emerged Wednesday from the first government-to-government talks between the two Koreas in more than a year. 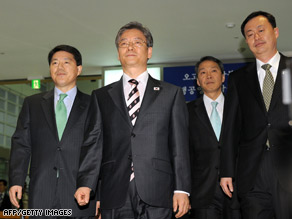 A South Korean delegation arrives at a transit office in Paju, South Korea, near the Demilitarized Zone.

The two sides were to discuss business deals tied to the Kaesung Industrial Complex in North Korea, which is run by both nations. The talks broke off after the North Korean delegation refused to discuss the release of a detained South Korean worker, saying he was not on the agenda, according to South Korean officials.

The South Korean delegation was not able to meet the worker, or learn whether he would be formally charged with a crime, the Unification Ministry said.

The employee of Hyundai Asan Corp. has been accused of criticizing North Korea's political system and trying to persuade a local worker to defect, according to the Yonhap news agency. Pyongyang has held him at the industrial complex since March 30, the news agency said.

The South Korea delegation said it would take "stern action that could lead to serious consequences," if the matter were not resolved.

The brief meeting between North and South follows the recent test launch of a long-range rocket by North Korea.

The launch was condemned by the U.N. Security Council as a violation of a resolution banning ballistic missile testing. North Korea later expelled U.S. nuclear experts and U.N. nuclear inspectors, ended six-party talks and said it would reactivate all its nuclear facilities.