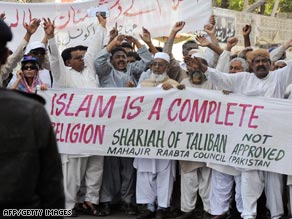 Protests in Karachi against the creation of sharia courts in Swat Valley.

Here are some answers about the Swat Valley, its history and what's taking place there.

What is Swat Valley?
Swat Valley is located in Pakistan's North West Frontier Province, near the border with Afghanistan and about 185 miles (300 kilometers) from the Pakistani capital of Islamabad.

The alpine region once was one of Pakistan's premier tourist destinations, boasting the nation's only ski resort until it was shut down after Taliban militants overran the area. It also was a draw for trout-fishing enthusiasts and those wishing to visit the ancient Buddhist ruins in the area.

What's happening in Swat Valley?
In recent years Taliban militants unleashed a wave of violence that claimed hundreds of lives in the province. The militants wanted sharia law -- or Islamic law -- imposed in the region. They took over the valley in 2008.

The central government of Pakistan, which long exerted little control in the area, launched an intense military offensive in late July to flush out the militants. In retaliation, the Taliban carried out a series of deadly attacks and began gaining ground, setting up checkpoints in the area.

Has the government intervened?
The militants and the Pakistani government reached a peace deal earlier this year, which was recently signed into law by Pakistani President Asif Ali Zardari.

Under the deal, sharia law was imposed in the region. While the peace deal drew criticism for the Pakistani government, some analysts and political observers say the government had little choice but to capitulate, as militants have terrorized the region with beheadings, kidnappings and the destruction of schools.

What's happening now?
This week, the Taliban moved to seize control of the neighboring Buner district, bringing it closer to Islamabad than it has been since Taliban insurgency began.

What is sharia law?
Sharia law is Islamic law. While there are different interpretations of it, the Taliban's strict interpretation forbids women from being seen in public without their husbands and fathers, requires veils for women and beards for men, and bans music and television.

Consequences are severe; during the Taliban struggle to impose sharia law, anyone found disobeying was pinned to the ground and lashed. Others were beheaded and hung from poles, with notices attached to their bodies that anyone daring to remove the corpse before 48 hours had passed would also be beheaded and hanged.