(CNN) -- The Sri Lankan offensive against the faltering Tamil Tiger rebel movement has killed or wounded "significant numbers," and thousands are trapped by the fighting, the United Nations said Wednesday. 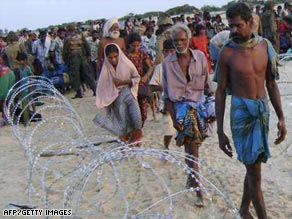 A Sri Lanka army photo of what it says are refugees fleeing a rebel area.

The Sri Lankan army launched an operation against the Liberation Tigers of Tamil Elam in the country's north on Monday, and a deadline for the rebels to surrender passed Tuesday.

Government troops say they have rescued 39,000 civilians trapped in the area, but tens of thousands more remain wedged into an 8-square-mile strip of land on the island's northeastern coast, which remains controlled by the rebels, the U.S. State Department said Tuesday.

The U.N.'s humanitarian agency described the conflict zone as "highly chaotic" Wednesday, with reports of continued fighting, and aid cut off to more than 80,000 people displaced by the fighting since April 1.

"While there are no verifiable numbers of overall casualties, we believe that significant numbers have been killed and injured in the military operation," the agency said.

But the rebels have suffered a string of military setbacks since November, with their provisional capital falling to government troops in January.

The U.N. Office for the Coordination of Humanitarian Affairs said in a statement on the conflict: "The United Nations remains extremely concerned about the safety of the civilians left in the combat area. Given that the area has shrunk even further, the potential for further significant casualties still remains."

The situation has led to stepped-up diplomatic efforts to bring an end to the conflict.

Sri Lanka will be on the agenda when the Security Council meets Wednesday evening, with France calling for the Tigers to surrender, release hostages and "join the political process."

"These killings must stop," Mukherjee said in a statement from his office. "The Sri Lankan government has a responsibility to protect its own citizens. And the (rebel group) must stop its barbaric attempt to hold civilians hostage."

He said the conflict has no military solution, and any lasting settlement must address "the real concerns of the Tamil people."

And in Washington, Secretary of State Hillary Clinton told a congressional committee the United States has begun "intensive post-conflict planning" aimed at reaching a political solution and allowing humanitarian aid into the region.

"I think that the Sri Lankan government knows that the entire world is very disappointed, that in its efforts to end what it sees as 25 years of conflict, it is causing such untold suffering," Clinton said.

CNN's Richard Roth and Harmeet Singh contributed to this report.