KANDAHAR, Afghanistan (CNN) -- The soldiers had barely arrived in Iraq before they got new orders -- get ready for Afghanistan. 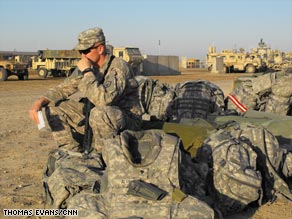 A soldier waits in Baghdad for a flight to his new mission in Kandahar.

The 4th Engineer Battalion out of Colorado Springs, Colorado, deployed to Camp Victory near Baghdad in mid-February. Two weeks after the unit began actually going out on operations in Iraq, it was ordered to redeploy to Kandahar in Afghanistan.

The soldiers hadn't even finished painting their emblem outside their tactical operations command when the move began.

But even as he walked through the stripped-down post, battalion commander Lt. Col. Kevin Landers could not hold back his excitement.

"The president has asked our military and our country to shift the focus and bolster the effort in Afghanistan, and we are really spearheading some of that effort, so of course there is some excitement here," he said outside a building being cleared out.

The move put a strain on this battalion, which specializes in route clearance, or finding and destroying land mines and bombs on roads to make them safe for travel.

"Yes, it is hard work," said Pfc. Kimble Han, sweat pouring down his face as he pulled out a sandbag foundation for a tent he and colleagues had put out only weeks before.

"But I believe we have trained well and are prepared for the new mission in Afghanistan."

The battlefield in Afghanistan is very different than Iraq.

"In Iraq you are looking at more close-quarters combat in an urban environment, but in Afghanistan the area is only sparsely populated and we are looking at much more of a linear battlefield," said Lt. Matthew Fitzgibbon.

That means the soldiers will probably be engaged in longer distance firefights while on their patrols and their training in Baghdad before the deployment mirrored that.

The troops spent extra hours on the shooting range, recalibrating their weapons and testing different optics. "No matter who the enemy is, we will bring a bigger fight," one soldier said loading his weapon.

As the United States shifts its focus from Iraq to Afghanistan, the military has deemed route clearance so important to the operations in the Kandahar area that it is airlifting the entire battalion to the new battlefield.

The move poses huge logistical challenges to the Army and especially the Air Force. Between 50 and 70 gigantic C-17 cargo planes are necessary to transport dozens of heavy armored mine-resistant vehicles, containers and pallets -- all this as the Air Force's capabilities are strained due to regular combat operations. Many flights are delayed, canceled, rescheduled and then canceled again.

Lt. William Hutaff, one of the first soldiers to leave for Afghanistan as part of an advance party, had his flight delayed several times and waited almost two days before he could board one of the cargo planes.

"Yeah, there's been a lot of waiting," he said from a seat in the hull of the plane, facing his mine-resistant vehicle that was shipping out too. "We are glad we are finally going and we hope someone will be there to pick us up."

None of the soldiers with whom CNN traveled to Afghanistan knew what to expect when they hit the ground in Kandahar.

The bases in Iraq have been developed over the past six years since the United States led the invasion and offer amenities from shopping facilities to coffee shops.

In Iraq, the soldiers stayed in solid trailers. In Afghanistan, they would be living in tents.

But none of that seemed on the soldiers' minds as the plane took off from Baghdad International Airport for the four-hour flight to Afghanistan, and many of them went to sleep shortly after takeoff or listened to music on their iPods in the dark and loud hull of the giant plane.

The terrain the jet was flying over changed from the Iraqi desert to the more rugged hills of southern Afghanistan before the crew of the C-17 crew performed a combat landing into Kandahar International Airport.

Leaving the aircraft, the soldiers said they were tired and looking to get into their new housing units.

"We want to get our vehicle unloaded and then get settled in," Hutaff said.

Getting settled in meant sleeping in cots in a tent designed to house more than 100 people, but the base itself proved more developed than many had thought, with a basketball court and even an hockey rink built by the Canadian contingent stationed there.

But the compound assigned to the battalion proved to be a lot worse for wear than the troops expected.

Years ago it had been home to Polish troops, but now the buildings were withering away in the sun.

The engineers spent their first days tearing down some structures with bulldozers and ripping the interiors out of others.

"There is still a lot of work to be done here," said Fitzgibbon. "right now our motor pool, the place we're supposed to park our vehicles, is a lake."