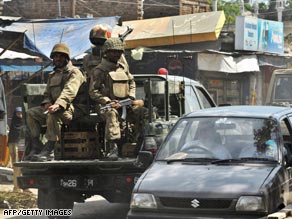 This comes as Pakistan's Frontier Corps launched an offensive against suspected militants and their hideouts in Lower Dir, which neighbors the violence-plagued Swat.

The suspected militant hideouts targeted by the military are in Islampura and Lal Qila in Lower Dir. A "heavy exchange of fire" was reported at both Kala Dag and Lal Qila.

There were reports of many Taliban deaths, including an "important local commander." One security force member was killed and four others were wounded, the military said.

Army Col. Attiq Ahmed told CNN about the military operation, and a Taliban spokesman in the area confirmed it.

The Taliban "know who the people are who raise their voices for the operation," Dadullah said. "We know them, they are on our hit list and we will target them."

Lower Dir is one of the districts included in the recent peace deal between the government and the Taliban.

The peace deal encompasses the Malakand Division, which includes the following areas: Swat, Lower Dir, Upper Dir, Buner, Shangla, Chitral and Malakand. Kohistan, which is not in Malakand division, is also covered under the deal.