(CNN) -- Sri Lanka ordered an end to combat operations against Tamil Tiger rebels in the country's north, the president's office said Monday. But the rebels accused the military of continuing to bomb civilians. 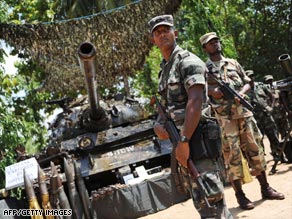 Sri Lankan soldiers stand guard next to a tank captured from the Tamil Tigers.

"Our security forces have been instructed to end the use of heavy-caliber guns, combat aircraft and aerial weapons which could cause civilian casualties," according a statement from the Presidential Secretariat.

A rebel Web site, Tamilnet.com, immediately accused the government of violating its own order and "deceiving the international community."

"Two Sri Lanka air force fighter bombers continued to bomb civilian targets in Mu'l'li-vaaykkaal after the announcement by the Sri Lankan forces that it would not deploy heavy weapons or carry out air attacks," Tamilnet said, citing S. Puleedevan, director of the Tamil Peace Secretariat.

"Obviously we need to see what that means in practice," John Holmes, the head of U.N. humanitarian operations, said about the government announcement to end combat operations. "But, on the face of it, I think it's good news."

The military will now concentrate on "saving" and "rescuing civilians," who have been caught in the fighting between government forces and rebel fighters, the presidential statement said.

The government's decision followed an unscheduled meeting of the National Security Council called by President Mahinda Rajapaksa. The session included the commanders of the army, navy and air force.

The developments came a day after Sri Lankan officials rejected a proposed cease-fire from the Tamil rebels, warning instead that government troops would continue a new offensive until the group surrendered, a senior government official told CNN.

"The government is firm that (the rebels) lay down their arms and surrender. We do not recognize this so-called offer," said Lakshman Hulugalle, director of Sri Lanka's Media Center for National Security.

The Tiger leadership had asked the international community to "pressure the Sri Lankan government to reciprocate" on the cease-fire offer. The United States, the United Nations, the European Union and India have called for a cease-fire.

The foreign ministers of three nations are due in Sri Lanka on Wednesday -- David Miliband of the United Kingdom, Bernard Kouchner of France and Carl Bildt of Sweden.

The rebels' proposed cease-fire came six days after the Sri Lankan army launched a new offensive against the Liberation Tigers of Tamil Elam (LTTE). Government troops made significant advances into rebel-held territory on Friday and Saturday, according to Sri Lankan army sources.

A government-imposed deadline for the Tigers to surrender passed last Tuesday. Tens of thousands of displaced civilians currently remain wedged in a dwindling swath of territory controlled by the Tigers along the country's northeastern coast.

Government troops say they have rescued 39,000 civilians trapped in the area, but a U.N. refugee agency said Friday that a wave of "fresh displacement" now exceeds 100,000 people.

Watch civilians describe what they are experiencing »

Fifty metric tons of relief supplies -- which landed in Colombo on Monday -- will be sent by UNICEF to the north to help displaced residents.

UNICEF, which called the situation in the north a "catastrophe for children," said the displaced lack food, water and basic medical supplies.

The rebels estimate the number of civilians still located in the territory at more than 160,000.