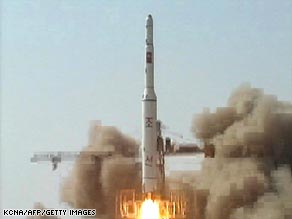 The U.N. Security Council "should promptly make an apology for having infringed the sovereignty of [North Korea] and withdraw all its unreasonable and discriminative 'resolutions' and decisions adopted against [North Korea]," a spokesman for the North's Foreign Ministry said in a statement.

"The measures will include nuclear tests and test-firings of intercontinental ballistic missiles," the unidentified spokesman said.

The Security Council condemned the April 5 rocket launch as a violation of a 2006 resolution that bans North Korea's ballistic missile activity.

North Korea, angered by the Security Council's unanimous vote, has threatened to walk away from the six-party talks aimed at disarming the country of nuclear weapons. It has said it will restore its disabled nuclear reactor.

"The reprocessing of spent fuel rods from the pilot atomic power plant began as declared in the Foreign Ministry statement dated April 14," a ministry spokesman said.

"This will contribute to bolstering the nuclear deterrence for self-defense in every way to cope with the increasing military threats from the hostile forces."