Dozens of Taliban killed in crackdown

ISLAMABAD, Pakistan (CNN) -- Pakistan's military killed at least 55 militants over the past 24 hours as part of its week-long crackdown on Taliban militants, an army spokesman said Friday. 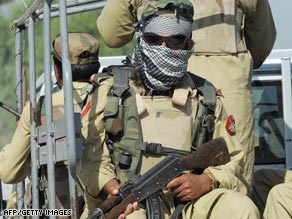 This week's military operation resulted in more than 230 militant casualties since Sunday, while the military suffered two deaths and eight injuries, according to spokesman Maj. Gen. Athar Abbas.

He has said he hopes the operation will be completed by the end of the week.

The operation is part of the Pakistani army's intensified drive against the Taliban in its restive tribal regions.

The Pakistani government has been criticized for not cracking down on militants along its border with Afghanistan. As a result, the U.S. military has carried out airstrikes against militant targets in Pakistan, which have rankled relations between the two countries.

The incident, which took place early Friday morning in the Arghandab District of Zabul province, occurred after a military convoy was attacked.

"The patrol was en route to a local village to talk with elders about security issues in the area when they were attacked by several armed militants with small-arms fire from a compound. The combined force returned fire killing one militant," the military said in a statement.

As Afghan security forces secured and searched that and other compounds to make sure there "were no non-combatants in danger," militants shot at troops and the soldiers fired backed.

The Afghan and coalition forces pursued the militants into a "nearby cave complex" where 14 militants were killed and 12 were wounded. Another militant was detained.