LAHORE, Pakistan (CNN) -- Angry protests are a common sight in Pakistan. Crowds often gather to denounce the United States or the Pakistani government, which critics accuse of being an American puppet. 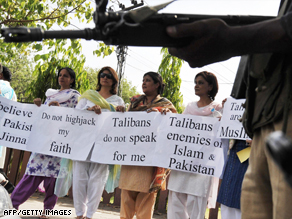 But in the eastern Pakistani city of Lahore this week, several hundred protesters gathered on a scorching day to take on a very different target: the Taliban.

"I will fight them to my last breath and the last drop of my blood in my body. I'm not scared," vowed newspaper publisher Jugnu Mohsin.

She was leading a crowd of several hundred students, artists, writers and others, chanting "the Taliban is the enemy of Islam" in Urdu.

Public protests against the Taliban started cropping up in various Pakistani cities after a video emerged showing militants publicly flogging a teenage girl. The Taliban's recent declaration that the Pakistani government and judicial system are "unIslamic" has also outraged many educated Pakistanis.

Neha Mehdi moved to Lahore to study. Now, she fears her way of life is being threatened by the Taliban.

"There were threats here also from the Taliban that if we gather they might just bomb us," Mehdi said.

Watch how the anti-Taliban movement is growing »

More than 250 miles away, Pakistan's military continued its assault against Taliban militants who want to impose a radical interpretation of Islamic law in the country's northwestern tribal regions.

Pakistan's government recently signed a deal that would allow Islamic law, or sharia, in the tribal belt as long as the law was imposed in accordance with the country's constitution.

Mehdi and others in Lahore fear that the Taliban's version of sharia -- which forbids girls from attending school, as well as music, poetry and dance -- is slowly creeping into Lahore, the center of Pakistani culture.

"Our way of life is being threatened," said Kamiar Rokni, a fashion designer who took part in the protest. "And if we don't do anything about it, then you're just going to be sitting around and one day the way you live and what this country's all about is going to stand for nothing."

Rokni said he fears the Taliban "want to change the way we exist."

Lahore may be hundreds of miles away from the Taliban-held areas outside Islamabad, but it is no stranger to militant attacks.

"Last year we lost 39 people in acts of terrorism and this year we have lost 17 people in Lahore alone," Lahore police Chief Parvez Rathore said.

As he speaks, a heavily armed escort is one step behind the police chief even as he walks outside the walls of the city's police headquarters.

Weeks later, militants dressed in police uniforms stormed a police training center in the city, prompting an eight-hour stand-off with police. Eight cadets were killed during the March 30 siege, which the government blamed on Pakistan's Taliban.

Police in Lahore said the attacks would not have been possible without local support. Residents say there is no doubt that the Taliban have support in Pakistan's second largest city.

"They're here in Lahore, this is the thing," said Jamal Rahman, who plays guitar for the Lahore-based band, "Lal" which means "Red."

"Little groups of the Taliban are going around and intimidating people, causing fear, telling women to cover up and if they don't they'll shoot them."

Rahman and his cousin, Aider -- who plays flute for "Lal" -- are using their music to rally society against what he says is a growing threat by the Taliban.

It is unclear if the protests and rallying cries from Rahman and the others in Lahore are the start of a mass movement or simply the swan song of Pakistan's wealthy, urban elite who could be the first to leave if the suicide bombers and insurgents succeed in further destabilizing the country.

Either way, their message is a sign that more Pakistanis believe the Taliban's threat is directed at them, and not just a reaction to the so-called U.S.-led "war on terror."

Mehdi said she fears her life as a student could come to a violent end if the people of Lahore do not stand up to Islamic extremists.

"If the Taliban take over then I'll be on the road being flogged by one of them like they did in Swat and I don't want that," she said.

Some Pakistanis are resorting to violence to defend their turf.

More than 30 people were killed in the southern port city of Karachi this week as members of the city's Mahajir ethnic majority group engaged in deadly clashes with ethnic Pashtuns. The Taliban is a mostly Pashtun movement.

The government in Karachi has issued a "shoot on sight" order to security forces, to try to maintain calm in the city.

A week before the clashes erupted, a leader of the MQM political party, which represents the Mahajir community in Karachi, said his supporters would fight back against what he called the "Talibanization" of his city.