Civilians told to flee ahead of Pakistan offensive against Taliban

ISLAMABAD, Pakistan (CNN) -- Some 500,000 civilians are expected to flee Pakistan's Swat Valley, heeding a government evacuation order issued Tuesday ahead of an expected military offensive in the Taliban-dominated region. 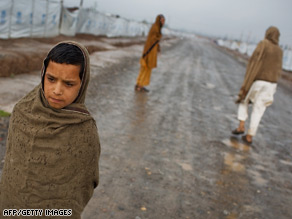 A Pakistani boy walks through a camp in Peshawar, Pakistan, after fleeing Taliban-Pakistani fighting.

Dr. Lal Noor Afridi said many people "panicked" when they heard the order and quickly fled, including many women and children in the Swat town of Saidu Sharif. At least 18 civilians were wounded in the town Tuesday, caught in the crossfire between Taliban militants and government forces, he said.

They were treated at the main medical facility in Swat, Saidu Teaching Hospital, where Afridi is the medical superintendent. He spoke to CNN from his home during a curfew.

"I can hear shooting all around," Afridi said. "The Taliban are in the streets."

The violence comes on the eve of a meeting between Pakistani President Asif Ali Zardari and U.S. President Barack Obama.

Richard Holbrooke, the U.S. special envoy for Pakistan and Afghanistan, dismissed rumors Tuesday that the Obama administration is backing away from its support for Zardari as he is tested by Taliban and al Qaeda extremists.

Taliban militants attacked a police station in Saidu Sharif shortly before 5 p.m. (7 a.m. ET), sparking a firefight that was still ongoing hours later, according to an officer in charge of the station.

The officer spoke to CNN during the siege and did not want to be identified for security reasons. He said a deputy inspector was killed during the attack.

The top civilian official in the region issued an order Tuesday for residents to evacuate neighborhoods in and around the Swat district capital of Mingora, which is flush with Taliban militants.

The militants are marching on the streets of the city, threatening the lives of civilians, local administrators, and security forces, according to the Pakistani military.

Authorities in Swat lifted a curfew Tuesday between 1:30 and 7 p.m. to allow residents to leave the area, Swat District Coordination Officer Khushal Khan said. He noted that after Wednesday, "there will be no time" for evacuations.

The military is expected to broaden its offensive in Swat on Wednesday. The government has ordered evacuations and banned the use of motorcycles, which are commonly used by Taliban militants.

The provincial government is planning to set up six new camps for the influx of displaced civilians, in addition to existing camps in and around Peshawar, according to a North West Frontier Province spokesman.

The expected civilian exodus will add to the already massive displacement of people in northwestern Pakistan. The United Nations estimates more then 50,000 civilians have fled the fighting in Buner, which is a little more than 60 miles (100 kilometers) northwest of the Pakistani capital.

"We are planning ahead toward the Swat Valley ... these are the areas which are required to be cleared," he said.

The fighting has spilled into other areas of Pakistan's tribal region. In the Mohmand district on the Afghan border, militants attacked a security forces checkpoint, prompting a firefight that killed 15 militants and two Pakistani soldiers, the military said. Six other soldiers are missing after the attack in Spinkai Tangi.

CNN's Samson Desta and Ivan Watson contributed to this report.