(CNN) -- Afghan civilians were killed in U.S. airstrikes during fighting this week in western Afghanistan, local officials and the Red Cross said. 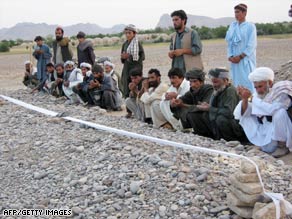 Villagers pray at a mass grave this week after an airstrike in Afghanistan's Farah province.

The reports come as concerns mount over noncombatant casualties in the war against the Taliban.

But the top U.S. commander in Afghanistan said the U.S. military suspects the incident started when Taliban militants entered the area and beheaded three civilians.

And another senior U.S. military official said Taliban militants may have killed as many as 15 civilians with grenades and then paraded their shrapnel-riddled bodies through villages in western Afghanistan.

U.S. Secretary of State Hillary Clinton said Wednesday she "deeply regrets" the loss of civilian lives but pointed out "we don't know all of the circumstances" and promised an investigation.

Afghan officials have said that a number of civilians died Tuesday during U.S. airstrikes on villages in Farah Province.

The International Committee of the Red Cross said in a news release that its "impression was that dozens of people, including women and children, had been killed." The ICRC workers were told that some of the dead had already been buried by the time they arrived on the scene.

"We are deeply concerned by these events," Reto Stocker, the ICRC's head of delegation in Kabul, Afghanistan, said in a statement. "We know that those killed included an Afghan Red Crescent volunteer and 13 members of his family who had been sheltering from fighting in a house that was bombed in an airstrike."

But U.S. officials believe the Taliban deliberately engineered a ground attack against Afghan and U.S. forces, expecting the United States would call in airstrikes. They said the Taliban were then prepared to kill the civilians.

A senior U.S. military official said there was "very reliable intelligence" that Taliban fighters rounded up three families, including women and children, and killed them with grenades.

The official would not allow his name to be used because a preliminary investigation into the matter is ongoing and no conclusions have been reached.

Their bodies, shrapnel wounds visible, were then put into the backs of trucks and driven through the area in an effort to convince villagers that the U.S. military operation had killed them. The official said he did not know who drove the trucks -- other Taliban or local Afghans forced into duty.

"No one is disputing people died, it's how they died," the official said.

"What we do have is strong evidence to support that a number of women and children were killed by the Taliban and their bodies were driven by locals as evidence of U.S. bombing," the official said.

Some Afghan civilians may have been killed or wounded before the airstrikes during ground fighting between the Taliban and Afghanistan and U.S. forces, the official said. But the military's investigation found no evidence of large-scale civilian deaths resulting from the airstrikes themselves, despite the claims from Afghan officials and the Red Cross.

U.S. military investigators found no evidence of human remains in any of the four bomb craters it examined, the official said.

The news comes as Afghan President Hamid Karzai visits Washington this week. Karzai and his Pakistani counterpart, President Asif Ali Zardari, are talking with key congressional leaders and policymakers ahead of meetings with President Obama and Clinton.

Speaking in Washington, Clinton -- flanked by Karzai and Zardari -- said the United States and Afghanistan will jointly investigate the airstrike and its aftermath. She said Washington already has sent a team of investigators to the region.

The increase of international troops in Afghanistan has raised a concern that fighting will intensify and civilians will face greater risks of getting hurt, she said.

"It's all sides who need to respect the civilians," Barry said. "And this is the message we pass to all the armed forces, to the international forces, to the Taliban, to the armed opposition."

CNN's Barbara Starr and Chris Lawrence contributed to this report.