An estimated 40,000 people flee city of Mingora as forces clash 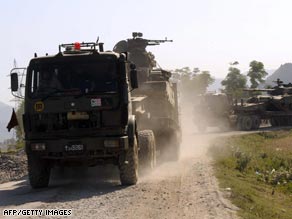 Pakistani army trucks transport cannons for the military operation against the Taliban.

The Pakistani forces had killed 35 militants in Wednesday's fighting, the officials said.

The officials said there are reports of some civilian casualties in Wednesday's fighting -- which has been concentrated in Swat's district capital of Mingora -- but they denied local media reports that 35 civilians died.

An eyewitness said he saw the bodies of 15 civilians were being taken from a village near Mingora on Wednesday. Twelve of the dead were children.

Taliban militants have laid siege to Mingora, looting banks, attacking army headquarters, the police station, and the main power grid station, the officials said. They are also occupying civilian houses and government buildings in the city center, according to the military.

The fighting has trapped 80 boys inside an orphanage in the city, according to Muhammad Ali, the director of the facility. Another 20 staffers are also holed up inside the four-story building, and they only have enough food for two more days, Ali said.

Local government officials issued an evacuation order for the Swat area Tuesday, ahead of the military operation. An estimated 40,000 people have fled Mingora, according to Khushhal Khan, district coordination officer.

Government officials warn that the fighting could lead to the exodus of 500,000 civilians.

Fighting continues in those two districts, and the operations are "progressing smoothly," the military said Wednesday. Militants struck a girls' college in the area with rocket fire, partially damaging the building, the military said.

Watch conditions in a refugee camp in Pakistan »

Pakistan's government recently signed a deal that would allow Islamic law, or sharia, in the Swat Valley, in exchange for an end to fighting. The government began its military operation after Taliban militants moved into the Buner district and refused to disarm, in violation of the agreement.

Obama is hoping to build an enduring regional alliance with both countries, enlisting them as full partners rather than treating them as battlefields for U.S. soldiers to fight extremists.

CNN's Samson Desta and Elise Labott contributed to this report.