NEW DELHI, India (CNN) -- There was stone cold silence in the car, as the Kumars drove home. 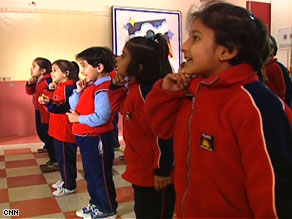 The married couple had stopped speaking out of sheer frustration and disappointment.

They had been rejected for the 10th time. Their three-year-old daughter, Janhavi, would not be attending any of the nursery schools to which they had applied.

"There's been a ban on children interviews," said the girl's mother, Geeta Kumar. "But the schools being very smart, acting very smart they want to meet parents informally, informal interaction they are calling and they are scoring on us."

"We are being tested," Puneet Kumar, Janhavi's father, interrupted.

"Yeah we're being tested for our child's admission." Geeta added.

"It's the worst thing we've been through," Puneet said with a sigh.

It may sound over dramatic but it is a sentiment held by many parents who suffer through sleepless nights, endless anxiety, and are sometimes reduced to tears, as they try to get their children admitted to nursery schools with good reputations.

At one of these schools, the headmistress has seen more than her share of desperation.

"But when a parent comes and he's literally begging and saying, 'Ma'am where do I take my child,' and he's got tears in his eyes, he's shivering. Believe me, it's heartbreaking."

"The thing is, everybody wants their child to be in the best school," Geeta Kumar said. "And there are very few."

The problem is particularly acute in the capital of New Delhi, where getting your child admitted to any one of the top 10 sought-after nursery schools is harder than it would be for a college-aged student to gain admission to Ivy League schools in the United States, such as Harvard or Yale.

Why? In India it is almost always about the numbers. There are a billion people in this country, and more and more of them are moving into urban areas trying to make a living -- which translates into more students trying to get a seat in schools that already have long waiting lists.

Take, for example, Salwan Montessori School in New Delhi. They received 2,500 applications -- for 150 spots -- for the 2009 school year. Only 6 percent of those who applied got in, and Salwan is not the most sought-after school.

Some schools have places for less than 4 percent of applicants.

Compare that to the Harvard University class of 2009:

You might be wondering why nursery school admission is so important since the child will have a lot of schooling to go through before thinking about university.

The answer: Many students spend 14 years in one school, so where they go to nursery school determines the next 14 years of their education.

What kind of education does one of these sought after schools offer? At Salwan Montessori, the children learn public speaking, music, several sports, and social skills along with their basic education.

It is just the kind of thing parents are looking for because they know education is key to their child's chance at a better life.

But there are other institutions that are not so cramped: Government schools. Just the mention of it sent shivers down the Kumars' spines.

"The grooming would not be good, the child won't grow, the mind won't grow," Geeta Kumar said with a deep frown, her husband itching to chime in.

"Nearest school to my place is a government school, but the infrastructure is very bad," Puneet Kumar added.

Parents complain some of the government schools are falling apart. The toilets are broken, there is no running water, and teachers sometimes simply fail to show up for class.

The fight for good education is fierce. But Salwan Montessori Headmistress Mathur said parents need to realize that just because they do not get the school of their choice does not mean their child will be unsuccessful. She also noted that not all government schools were unfit.

For the meantime, the Kumars are still tied in knots. Their daughter Janhavi was forced to go to a lesser known private school in their neighborhood.

Now four years old, Janhavi seems oblivious to it all. She is a smart little girl. Before even showing up at school she could speak Hindi, some English and Japanese.

As she sits on her bed counting to 10 in Japanese, her parents are counting the months before the next admission process starts. They are planning on going through the process all over again next year.

"Obviously," Geeta Kumar said. "You aim for the best."