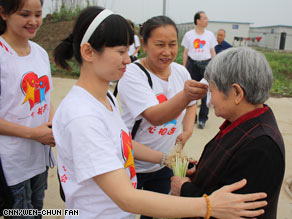 Volunteers comfort residents of Anxian temporary housing camp, most of them from Beichuan County.

The initial tremor, which had an 8.0 magnitude, was so strong it was felt as far away as Beijing and even Bangkok, more than 2,000 kilometers (nearly 1250 miles) away. The epicenter: Wenchuan County, a lush, mountainous region with a population of more than 111,000 people. It is also the natural habitat of the giant pandas.

Watch how far one flattened village has come in a year »

However, since then, the government has come under some criticism for its handling of the post-quake period -- notably the quality of school construction in the affected area and the number of children who perished in the temblor.

Until a few days ago, there was no official tally of the number of children who died. Some parents pointed to poor design and use of substandard building materials as some of the reasons why many schools - described as "beancurd dregs buildings" - collapsed in areas where other buildings were not badly affected.

Volunteers have also been harassed, accused of prying into "state secrets," prompting protests from human rights activists in and outside of China.

In an open letter released last Thursday and addressed to Chinese leaders, a group of more than 140 Chinese writers, intellectuals and human rights activists welcomed the tally of student deaths but said it was not enough.

"We wish the authorities will do more, not just to investigate the identities of the student-victims but also to find out the factors that caused this massive deaths and injuries, which could have been avoided, in order to prevent similar occurrences. Same time, we ask that you stop the persecution of citizens who are investigating the incident and that you allow citizens to participate in the investigation of the deaths and in post-quake reconstruction."

Media coverage has been affected, too. The Foreign Correspondents' Club of China said it had "received several reports of journalists being harassed and detained in Sichuan province" in the lead up to the anniversary.

"Reporting restrictions are a barrier to understanding the circumstances and needs of the people trying to recover from last year's disaster. They should be lifted," said the group's president, Jonathan Watts, in a statement issued in April.

Amid the criticisms, Chinese officials said the post-quake reconstruction was progressing well.

Authorities have built 1 million houses in rural areas and 33,000 apartments in the cities, said Yu Wei, spokesman of Sichuan provincial government, last Thursday at a press conference, according to state media.

Still, some survivors continue to live in temporary housing, though it is not clear how many since the Chinese government has not released official figures.

Last month, Feng Xiang, 33, a public affairs official of Beichuan, which was located next to the quake epicenter, was found dead - the third local official known to have committed suicide in the devastated area.

Feng, who lost his 8-year-old son in the quake, posted an essay, "Many Ifs," on his blog an hour before his suicide, bidding goodbye to his family, friends and netizens.

"I think to respect life, which is quite rare in this culture today, to pay more attention to the value of human life, human rights and to fight for the basic dignity of life."