(CNN) -- Nearly 400 people were killed overnight Saturday by government shelling in what is supposed to be a "no-fire" zone of Sri Lanka, a humanitarian worker in the area told CNN on Sunday. 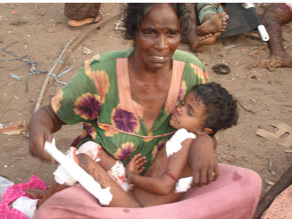 Most of the roughly 378 dead are civilians, and another 1,200 were wounded, the aid worker said.

Video sent to CNN by the pro-Tamil rebel pressure group ACT Now appeared to show dead and wounded civilians. The group says the video was taken Sunday in the "no-fire" zone. Another humanitarian group also supplied photos of casualties to CNN.

CNN cannot confirm the authenticity of either the video or the photos. CNN is not naming the humanitarian sources in the conflict zone to protect their safety.

The government denies the assertion it shelled the "no-fire" zone, saying it is the Tamil Tiger rebels who have been killing civilians.

Tamil Tiger "attacks using heavy weapons in the no-fire zone have caused immense damage to the civilians entrapped in the area," the government information department said, quoting the military.

But the military did say it had advanced Saturday into areas previously held by the rebels, officially known as the Liberation Tigers of Tamil Eelam.

"The LTTE terrorists have laid land mines heavily in the area to obstruct the security forces' advance and a number of LTTE terrorists were killed during fighting while many wounded," the government site said.

The pro-rebel Web site Tamilnet said rescue workers in the no-fire zone "have counted more than 1,200 bodies" and accused the army of "the use of cluster ammunition, multi-barrel rocket launchers and cannons.

"The workers fear that there may be additional bodies yet to be uncovered, and the numbers killed will likely rise," the pro-rebel site said.

Aid workers in the country said the situation is worsening and the next few days are "absolutely critical."

About 165,000 displaced people are in the Vavuniya region, where the United Nations and other humanitarian groups are trying to get relief to them, an aid group said.

Meanwhile, a British news team that had been detained by Sri Lankan authorities -- after producing a report about the alleged abuse of Tamils -- has left the country, news managers said Sunday.

The Channel 4 news team, which was detained on Saturday, is heading back to its base in Bangkok, Thailand, ITN senior news management said. ITN produces Channel 4's news programs.

The team's news report, which aired Tuesday, chronicled the abuse of Tamils in internment camps in the city of Vavuniya in northern Sri Lanka.

The report contained claims of bodies being left where they fell, shortages of food and water, and instances of sexual abuse.

The government denied the claims and arrested Channel 4 Asia correspondent Nick Paton-Walsh, a cameraman and a producer.

The Sri Lankan military has been on an offensive to try to finish off the ethnic Tamil insurgency that has been fighting since 1983 for an independent state in the northeast of the country.

As many as 70,000 people have been killed since the civil war began, and the group has been declared a terrorist organization by the European Union and more than 30 countries, including the United States.

Tamil Tiger rebels have been pinned down by Sri Lankan government troops in a small section of the country's north, and civilians trapped in the crossfire have been trying to flee.

CNN's Iqbal Athas, Amir Ahmed and Per Nyberg contributed to this report.