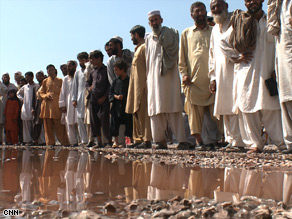 More than 360,000 Pakistanis have fled their homes since May 2, the United Nations has reported.

"Obviously more people are on the move," said Ariane Rummery, a spokeswoman for the U.N. human rights commissioner. "Not everyone is registered."

Thousands of vehicles fled Swat Valley on Sunday, where up to 15,000 Pakistani troops are preparing to move against approximately 5,000 Taliban militants, a regional official said.

In neighboring areas, Pakistan's military is continuing an offensive against the Taliban along its western border with Afghanistan, a military statement released Sunday said.

Watch the latest on the conflict »

Meanwhile, at least 25 boys stranded at the Khpal Kor Foundation orphanage in Swat Valley had to flee the district capital, Mingora, on foot Sunday, according to director Mohammed Ali.

Camps for the displaced have sprouted up throughout the country's northwest, with hospitals and humanitarian groups struggling to keep pace.

Troops fired on the suspicious vehicle as it approached, according to Khan.