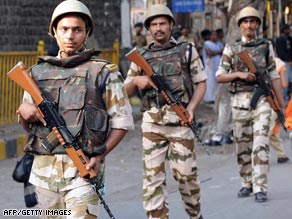 Soldiers patrol in Mumbai as the trial gets under way.

Even though officers were not carrying firearms, they were able to subdue Kasab, Nikam told CNN.

Two Mumbai police officers testified Tuesday, Nikam said. One, Sanjay Govilkar, was with the same unit as the slain assistant inspector and said he witnessed the shooting. He said he, too, was shot and wounded by Kasab.

Kasab is one of 10 Pakistani nationals who police said unleashed terror on India's financial capital for four days and three nights last November. Other suspects were killed during the attacks.

Kasab faces 86 charges including waging war against India, murder and attempted murder. He has pleaded not guilty to all the charges, and recanted a confession to the crimes that he said was made under duress.

The young man was caught on surveillance camera holding a gun as he stalked and killed people inside Mumbai's main train station in November, police said. He's also accused of shooting people at the city's Cama hospital.

Police said the gunmen killed more than 160 people as they took over three luxury hotels and a Jewish center, and shot up several other places, including a popular restaurant.

The attack was an effort to capture Kashmir, prosecutors said. A dispute over whether India or Pakistan owns the territory has led to several wars between the two countries.