'I imagine that my hands and body are bleeding' 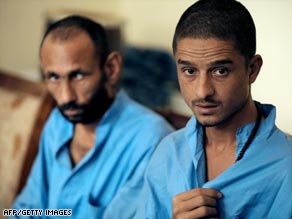 Patients sit in a psychiatric hospital in Afghanistan, where there is little money for treatment

Inside the run-down building are the shattered lives of a nation where peace is something remembered only by the old, where the constant roar of conflict is stealing people's sanity.

Dr. Najib, the hospital's deputy director, estimates that seven out of 10 people in Afghanistan suffer from depression, anxiety or some form of mental trauma.

This hospital, with only 62 beds, simply doesn't have the resources to cope, he said.

Doctors are paid only $3 a day and don't have medicine for their patients.

The fortunate few who do receive treatment often lie motionless in bed or wander the corridors aimlessly.

Watch more on the hospital »

An 18-year-old Afghan woman, who doesn't want to share her name, agrees to tell her story.

When she was 12 years old, she witnessed a rocket attack and is still tormented by the images of blood and death.

"I don't want to beat others, I just want to hurt myself," she said, covering her face with a scarf. "I want to jump off the roof, and I want to beat myself. I imagine that my hands and body are bleeding, there are injured people before my eyes, and I am in a bad place."

There are stories here of abuse and violence, of those tormented by family members who have disappeared or been killed.

One woman lies in her bed, babbling incoherently.

Her brother stands beside her, sometimes holding her hand or gently stroking her hair. Her doctor says she has lost her mind, wiping out chunks of her memory to hide the pain.

She saw four of her children killed in a U.S. airstrike only two months ago, but she still believes they are alive. She cannot accept the horrible reality.

"She suffers from major depression and is sometimes psychotic," her doctor says. "She is under medical treatment."

Her brother is furious at the United States for what has happened.

"Of course Americans are blamed for this," he said. "We are nomads, we don't have a kitchen, when we make fire to cook food, then they drop bombs on us and think that we are al Qaeda."

In the men's ward of the hospital, there is only apathy. People have simply given up.

Gulmir, 24, has no job, no wife or children and no interest in the future. A shrug is all he can manage when we ask about his plans.

Gulmir's mother curls up on the floor showing us how her son spent hours each day. She worries that he will never recover.

There are many casualties from 30 years of war in Afghanistan, but these are the wounds sometimes hardest to see.

Doctors say the fighting one day may end, but the psychological trauma will go on for generations.