BEIJING, China (CNN) -- Liu Yan, regarded as China's top classical dancer, was to give the performance of a lifetime: She was to dance a solo at the opening ceremony of the 2008 Beijing Olympics. 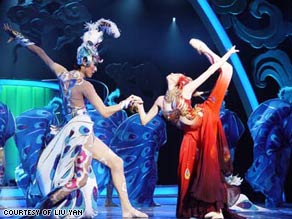 She was to perform a dance entitled "Silk Road," a piece intended to convey the rich cultural history of China.

But it never happened.

Twelve days before she was to take the stage at the Olympics, in an event that China hoped would catapult the nation to international glory, she fell while rehearsing the dance -- leaving her paralyzed from the waist down.

"When the music stopped, I made my exit as usual. I was dancing on a thin layer of electrical mat, I was standing on that, and there was a platform powered by a vehicle moving underneath," Liu said from the Beijing 306 Military Hospital. "Right when I stepped on the platform, it moved away quickly ... then, like that, I fell."

"It was extremely painful."

Liu, who was knocked unconscious, was later told she would never walk again. Doctors operated on her for six hours, and the hospital where she was being treated was near the Bird's Nest -- the landmark national stadium built for the Games. The stadium can be seen from Liu's hospital room window.

"I could not see it, because I was unable to sit up. But then, I could see the fireworks from the rehearsal," Liu said through tears.

She did not watch the opening ceremony.

"I was afraid to watch it," she said. "I was listening to Lisa Ono (a bossa nova singer) with the volume up to the highest on the stereo that used to be here in the corner. But, I watched it later."

Liu began attending the Beijing Dance Academy in 1993. She spent 10 years studying professional dancing, and classical Chinese dance was her major. She repeatedly received the annual Best Student award and went on to win gold awards in the national dancing competition in 2004, the Lotus Dancing competition and the first Asian Youth Art Festival.

She also won many top cultural awards in China for dance plays.

"When I was young, I was the kind of child who studied dancing very hard. I never gave up. I love dancing very much. When practicing some dancing movements, which other students considered boring, I saw the practice as very interesting," she said. "People thought that I took dancing very seriously because of my love for it, but I think it's very interesting."

Apart from the physical pain, Liu said: "The damage on my dancing career is the most painful part for me."

"I think this is very sad. But I am injured and it is a fact that cannot be changed. But I believe I will keep dancing or at least doing work related to that, because that is what I love."

Liu said she spends most of her time recovering in the hospital, exercising her legs to help develop her muscles. She said she feels much better now but it is still tough.

"I often cry. After I got injured, I feel fragile every time I reflect on the past. But I think of it as a process," she said. "I will learn to face the reality rationally. Human hearts are made of flesh; it is not one flat surface. The important thing is how you adjust yourself."

She has since started to return to her normal life.

"For example, going back home and staying overnight, going out with friends for dinner, even going to see a show, a movie, drink coffee, drink Champagne, going back to classes."

Liu does not blame anyone for the accident, saying that in big events, "accidents happen."

"I think you should not blame one person, or one particular moment," she said. "I think I will use the word 'unfortunate.' I was very unfortunate to have that accident."

She also said she did not know about reports her family and witnesses to the accident were told not to talk about what happened afterward.

"That probably happened. I didn't know about it back then and I didn't really care. I was in the middle of an operation that lasted six hours."

As for the future, Liu said she might go back to school, to learn more about dance, and get a master's or a doctorate degree.

"Healthy dancers practice every day, I will do the same. This is how I am different from other patients -- I believe that I will recover when I do my exercise. I will live with hope."