ISLAMABAD, Pakistan (CNN) -- The Taliban are digging in for a "bloody urban battle" against the Pakistani army in a hotly disputed city in the western part of the country, a strategic expert warned Thursday. 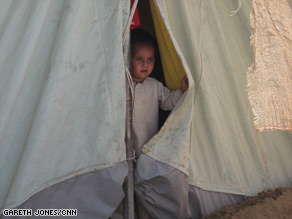 A Pakistani army spokesman says the military offensive has caused many to leave their homes for camps.

"The Taliban are concentrating forces in Mingora -- digging trenches, laying mines, taking positions on rooftops," said Reva Bhalla, the director of strategic analysis at Stratfor, a private firm that describes itself as a global intelligence company.

"It is not clear if the Pakistani military is trained and even equipped to go into a situation like that," she said, adding that even the United States military "would have to think twice" about such an offensive.

She estimates there are 5,000 Taliban fighters in the area.

"The question is: Are they going to try to stand and fight, or try to regroup?" she asked.

With a government offensive against the Taliban nearly three weeks old, a spokesman for Pakistan's army said the military intends to drive the Taliban out of the contested area.

"The whole resolve of the government and the military is to once and for all finish the Taliban from the Valley of Swat," Pakistani military spokesman Maj. Gen. Athar Abbas told CNN's Reza Sayah.

The Pakistani military is trying to push the Taliban away from the heavily forested and mountainous regions of the Swat district toward the south, so the army can encircle the militants, Bhalla said.

Stratfor based its analysis on "people on the ground" and "local reporting," declining to go into detail, she said. Journalists and aid workers have been barred from the conflict zone.

"The Pakistani military is putting a lot of fight into this," she said. But she warned that even if they win this battle, the war against the Taliban would not necessarily be over.

"This is not the first offensive in Swat -- it's actually the fourth," she said. "Each time Taliban has proven capable of regrouping and returning to this area."

She cautioned that the huge refugee camps the conflict is creating could be "the perfect recruiting grounds for the Taliban to prey on."

Some 1.5 million people have been displaced by 10 months of fighting between the Pakistani military and the Taliban along the country's border with Afghanistan, the chief minister of North West Frontier Province estimated Thursday.

Watch more about the victims of the war »

The world must launch a "massive international effort" to care for the refugees, or it will be "absolutely impossible" to provide for them, the United Nations' top official on refugees said Thursday.

The number of people at the Yar Hussain displaced-persons camp in Swabi district is expected to reach 2 million, Chief Minister Amir Haider Hoti said. The military announced earlier this week the number was 1.3 million.

The refugee population is roughly comparable to the size of the Sacramento, California, or Perth, Australia, urban areas, according to statistics at citymayors.com.

"They are our own people and their children are my children. Every [person] in this country is yearning to help these IDPs," he said, using the acronym for "internally displaced persons," the technical term for someone who has fled a crisis but not crossed an international border.

Some 800,000 people have registered with the U.N. refugee commission as people displaced by the recent fighting.

Disease is already starting to become a problem, with diarrhea and the skin disease scabies on the rise in the refugee camps, doctors there said.

Pakistani army spokesman Abbas denied refugees were fleeing direct fire from the army, but said the military offensive had caused many to leave their homes.

"The targets selected for the air campaign and the long-range artillery engagement were quite far away" from civilian population centers, "but the fact remains that this displacement is part of the overall effect of this operation," Abbas said.

The military said Thursday it is doing its best to cope with the refugees.

The "Pakistan Army understands that management of IDPs is as important as military operation in Swat and Special Support Group is making all efforts to manage the IDPs in a befitting manner," the military said in a written statement.

The army also said that in the previous 24 hours, 54 militants had been killed in the offensive in the Swat Valley, and nine members of the security forces had died.

Guterres said it is in the world's interest to deal with the problems of Pakistan and Afghanistan, which he called "the most important geostrategic issue in the world of today."

"This is not a Pakistani crisis," he said. "We are speaking of a complex regional problem. When I ask for the support of the international community, it is not an appeal for generosity -- it is an appeal for enlightened self-interest."