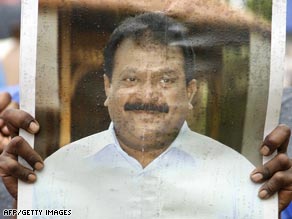 The Tamil rebel group, formally known as the Liberation Tigers of Tamil Eelam (LTTE), is aware of the government's report but has yet to confirm Prabhakaran's death or the deaths of its other leaders, according to a posting on the pro-rebel Web site, Tamilnet.com. It said "initial reports indicate a determined massacre by the Sri Lanka Army."

Prabhakaran was one of 19 senior LTTE leaders that the government has identified among the bodies found as its troops completed mop-up operations after routing the Tigers, the defense ministry said.

The leaders include Prabhakaran's eldest son, Charles Anthony, as well as Pottu Amman, LTTE's intelligence leader, according to the ministry.

Watch more on the possible end of fighting »

If the rebels honor their pledge, it would potentially mark the end of the longest-running civil war in Asia.

Sri Lanka's President Mahinda Rajapaksa is expected to announce that "military operations" against the Tiger rebels have ended in an address to parliament and country on Tuesday.