KABUL, Afghanistan (CNN) -- Militants continue to use a material not designed for use as a weapon against people to strike international forces in Afghanistan, the U.S.-coalition said Tuesday. 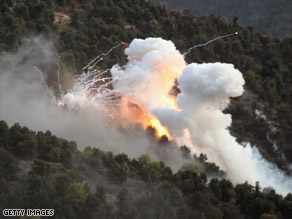 White phosphorus, a smoke-producing agent commonly used to hide military operations, can cause severe burns. Groups such as the Human Rights Watch and other watchdogs oppose its use in civilian areas.

The coalition's assertions come on the heels of criticism of international military activities that affect civilians in Afghanistan and claims that coalition forces have used the chemical against people, a charge the United States denies.

Militants on Tuesday "mortared" a NATO-led "combat outpost with white phosphorus and high explosive rounds" in Paktika province, the coalition said. No injuries and damage were reported.

On Saturday, troops found white phosphorous mortar rounds in Bamiyan and a white phosphorus rocket in a military base in Nangarhar province.

The U.S. military earlier this month declassified a report of 44 events in Afghanistan in which it said insurgents "used or stockpiled" munitions made of white phosphorus.

"The data, obtained from incident reporting from February 2003 through the present, show that insurgents have stockpiled and used white phosphorus against personnel in both indirect fire attacks as well as improvised explosive devices," the military said.

The Taliban has alleged that U.S. forces used the chemical in fighting insurgents May 4 in Farah province and injured civilians, but that assertion has been denied by the U.S. military.

"We've checked our reports again, and no munitions containing white phosphorous were used by coalition forces in Farah," a senior official said. "It is U.S. military policy to employ white phosphorous for illumination, marking targets or destroying buildings, but to abstain from using it against people."