YANGON, Myanmar (CNN) -- Prosecutors in Myanmar picked up the pace of calling witnesses to the stand Tuesday, offering hope to Aung San Suu Kyi's supporters that the opposition leader's trial -- which nine Nobel laureates have called "a mockery" -- may end soon. 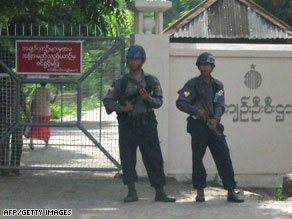 Soldiers guard the entrance to Insein Prison on Monday in Yangon, Myanmar.

Suu Kyi's National League for Democracy party and diplomatic sources had worried the government might drag out the legal proceedings for several months, until the media lost interest. The military junta would then quietly extend Suu Kyi's detention well beyond next year's planned elections, they feared.

But at the end of proceedings Tuesday, party spokesman Nyan Win said the court had questioned five witnesses. A day earlier, the court had heard from only two of the 22 witnesses it has called.

Nyan Win thinks the court might be speeding up the hearings so it can issue a verdict within seven days -- before Suu Kyi's latest round of home detention expires.

The latest extension expires later this month, and Suu Kyi's supporters say the trial provides the government an excuse to continue restricting her movement.

"The trial is a mockery," the nine Nobel Peace prize winners said in a letter to U.N. Secretary-General Ban Ki-moon on Monday, urging him to intervene.

"There is no judicial system in Burma," the letter said. "It is clear that this is an excuse by the military junta to add trumped-up charges at a time when Daw (an honorific) Aung San Suu Kyi's unlawful detention was scheduled to end May 27, 2009."

The southeast Asian country was known as Burma before the military government changed it to Myanmar.

The Association of Southeast Asian Nations on Tuesday expressed "grave concern" over the arrest of Aung San Suu Kyi. The group called for the immediate release of the pro-democracy leader and to provide her "humane treatment with dignity."

Also on trial are two of Suu Kyi's housekeepers and an American man who recently swam to her lakeside home -- prompting the prosecution.

The case is being tried behind closed doors inside a prison compound near Yangon. Police put up roadblocks outside, and turned away a group of Western diplomats who wanted to attend Monday.

On Tuesday, however, a U.S. Embassy official was allowed to watch the proceedings. The government-controlled media also made its first mention of the trial -- after carrying no reports about it before it began, or on its first day.

Suu Kyi, 63, and two of her maids have been detained under Section 22 of the country's legal code -- a law against subversion.

The charges stem from May 3, when an American, John William Yettaw, allegedly swam almost two miles across the lake behind Suu Kyi's crumbling, colonial-era home and stayed for two days.

Yettaw, a 53-year-old former military serviceman from Falcon, Missouri, is charged with violating immigration laws and trespassing into a restricted area. The charges carry a maximum sentence of five years in prison.

During the hearing Tuesday, four police witnesses and a civilian testified how Yettaw was fished out from Inya Lake after he left Suu Kyi's house.

One officer said he first thought Yettaw was a thief. Once it was discovered he was a foreigner, the officer notified superiors.

The defense will also try to turn the charges on their head, arguing that the government failed to protect Suu Kyi.

"Frankly, she does not believe she did any offense," said Jared Genser, a Washington, D.C.-based lawyer who is one of the attorneys defending her.

Another lawyer, U Kyi Win, said Yettaw refused to leave -- first saying he didn't want to swim in daylight for fear of being captured, and later blaming leg cramps.

The Nobel laureate has been the face of Myanmar's pro-democracy movement and the focus of a global campaign to free her. Her National League for Democracy party won over 80 percent of the legislative seats in 1990. She was disqualified from serving because of her house arrest, and the military junta ignored the results.

The government has said next year's scheduled elections will re-introduce democracy in Myanmar. But its plan includes a clause that forbids citizens who bore children with foreigners from running for office.

This makes Suu Kyi ineligible. She married a British man and has two sons with him.