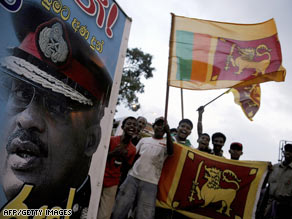 A crowd beside a portrait of Sri Lanka's president celebrate the country's military victory on May 18.

Rajapaksa announced that Wednesday would be a national holiday, to celebrate the war's end and begin a new phase in the country's history.

It is time for Sri Lanka to build "a new country ... a new nation," he said, calling "the defeat of Tamil terrorism ... a victory for the Tamil people."

"What have they given the Tamil people?" Rajapaksa asked, suggesting that the war had cost them far more than they had gained. With the war over, he said, Sri Lanka would begin to restore government services to Tamil areas.

The United Nations, meanwhile, urged the government to provide more for the 65,000 people who had fled the last fighting in the past few days. It said there were now 265,000 displaced people in the country.

A short time after the presidential address, the military announced that it had recovered the body of Tamil Tiger founder and leader Velupillai Prabhakaran. A local television station aired video it said showed his body.

The "psychopathic leader of the world's most barbaric terrorist outfit ... has been found," confirmed Gen. Sarath Fonseka, commander of the Sri Lankan army, according to the Ministry of Defense Web site. "Troops ... have found the bullet ridden body of the terrorist leader lying on the bank of the Nanthikadal lagoon," the ministry reported.

Watch more on aftermath of fighting »

But earlier in the day, the pro-rebel Web site Tamilnet.com reported that the Tigers' leader was "alive and safe," countering previous military claims.

The defense ministry said Prabhakaran and 18 other senior rebel leaders were among the bodies found in mop-up operations, after government troops routed the Tigers -- formally known as the Liberation Tigers of Tamil Eelam.

"Our beloved leader Velupillai is alive and safe," rebel spokesman Selvarasa Pathmanathan said, according to Tamilnet.com. "He will continue to lead the quest for dignity and freedom for the Tamil people."

CNN has been unable to independently confirm the accounts because of access and safety reasons.

News of Prabhakaran's death was greeted with pro-Tamil marches elsewhere in the world, with around 2,000 gathering outside parliament in London and others protesting in front of the White House in Washington.