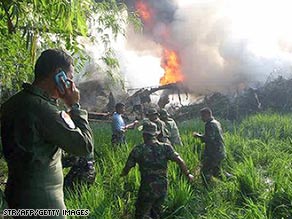 Soldiers search for victims at the plane's crash site in East Java Wednesday.

The death toll might rise, because the Air Force said 112 people were thought to be aboard when the Hercules transport plane crashed about 6:30 a.m.

The crash destroyed four homes and killed two people who lived in at least one of the homes, said Suwardi, the village leader of Karas in East Java.

The plane had a crew of 14 people and was carrying an additional 98 passengers, Major Gen. Suwarno said.

Watch the latest on the crash »

At least 15 people from the flight had been rescued, according to Bambang Sulistyo, an Indonesian air force spokesman.

Wahyu Nuryanto, a staff member at the Iswahyudi hospital in nearby Madiun, told local media that 19 people were brought to the hospital -- several with serious injuries, including multiple fractures.

Rescue crews Wednesday were evacuating the crash area where local media showed plumes of smoke billowing from a rice field and rescuers scrambling to move victims on makeshift stretchers.

The crash comes a day after another Indonesian Hercules transport plane crashed on a runway after touching down early. No one was killed in that crash in Papua province.

All About Indonesia • Air Transportation