ISLAMABAD, Pakistan (CNN) -- Hundreds of refugees on Wednesday blocked a main road in northwest Pakistan, to protest living conditions for some of the 1.5 million Pakistanis forced to flee their homes in the past three weeks. 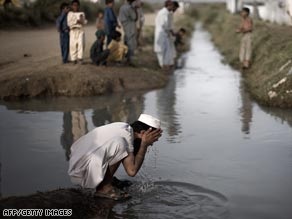 The refugee situation in Pakistan could be a bigger threat than fighting with Taliban, U.N. says.

"The government has been making big promises, but none of those were ever fulfilled," said Hazrat Bilal, a protester and refugee whose family has taken up temporary residence in a primary school.

The refugees had blocked the main road in Pakistan's Mardan district since 8 a.m. Wednesday, Bilal said by telephone. The demonstrators were demanding food, water and other government services, he said.

Mardan is a main transit point for the large numbers of Pakistanis fleeing the Swat Valley, the site of fierce fighting between Taliban militants and Pakistani soldiers.

On Tuesday, U.S. Secretary of State Hillary Clinton announced $110 million in humanitarian aid for Pakistani refugees. She also unveiled a system that lets Americans donate to the U.N. refugee effort, by sending a text message on mobile phone, including the word "Swat."

Meanwhile, Pakistan's military said it was continuing the assault on Taliban militants.

Pakistani forces have targeted regional Taliban commander Maulana Fazlullah and Taliban spokesman Muslim Khan, but have "no information about whether we have been successful," said the spokesman, Maj. Gen. Athar Abbas.

He said 80 "terrorists" were killed Tuesday night in "intense fighting" in the town of Sultanwas, located in Buner district. One Pakistani soldier was also killed in recent fighting, Abbas said.