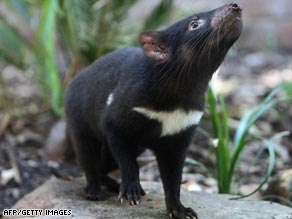 The Tasmanian devil's future is threatened by a contagious facial cancer that has killed large numbers.

"My decision to uplist the Tasmanian devil is based on advice from the Threatened Species Scientific Committee, which lists the devil facial tumor disease as the major threat to the devil," Environment Minister Peter Garrett said in a statement.

"This disease has led to the decline of about 70 percent of the Tasmanian devil population since the disease was first reported in 1996."

The disease has devastated the animals, native to the Australian state of Tasmania, an island off the southeastern coast.

Devil facial tumor disease is one of only three cancers known to spread like a contagious disease, according to the Tasmanian government's Web site. As the name implies, it causes tumors on the face and neck, and sometimes other parts of the body, and it's passed by biting.

The Australian government has committed $7.8 million over five years to the Save the Tasmanian Devil program, according to Garrett.

"This is to help with research into disease transmission and treatment, and will support captive and wild populations," he said.

In 2005, the program established a captive breeding insurance population. Disease-free animals were gathered from the wild population and are being bred on the mainland.

"As of February 2009, the insurance population had grown to 145 disease-free Tasmanian devils" at 10 zoos and wildlife parks, the Tasmanian government said.

"The animals in this breeding program could play an important role, if ever needed, in helping re-establish healthy wild populations in Tasmania."

Although the image of the Tasmanian devil has been popularized around the world by the Looney Tunes cartoon character Taz, the real thing is a much different animal. The devil, the world's only surviving marsupial carnivore, is about 25 pounds (12 kg) of bad attitude, with a haunting cry that's a combination of snorting and growling.