Ex-Taliban claims abuse at Gitmo, Bagram: 'They were beating me' 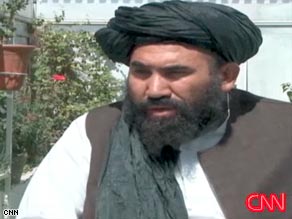 As a detainee, he was held both at Afghanistan's Bagram Air Base and at Guantanamo Bay in Cuba -- spending more than three years in Guantanamo before he was released in 2006.

Now free, Zaeef -- who claims he is no longer a Taliban member -- alleges the military engaged in abusive treatment both at Bagram and Guantanamo. He says he is still bitter about his time there. Closing Guantanamo Bay, he told CNN, is only part of the justice those detained there deserve.

"It was a bad stain on American history," he said. "If they are closing Guantanamo for justice, they have to bring the people who are torturing people, who abuse people, to justice."

The military has classified those like Zaeef as "enemy combatants," although the Justice Department in March said it would dispose of that classification. The U.S. military in Afghanistan said it was not authorized to comment on Zaeef's or any other individual case.

"I didn't see a worse situation in my life than Bagram," recalled Zaeef. "They were beating me, they put me in the snow, in the cold, until I was unconscious."

More than 600 prisoners have been held at Guantanamo Bay, Cuba, a controversial facility where prisoners are held for years without criminal charges and, critics allege, without access to legal representatives. The Red Cross has said conditions there are "harsh." Currently, 240 detainees remain at the facility.

President Obama has announced plans to close the military detention center, saying it has made the United States less safe and set back the country's "moral authority." His plans, however, have met with opposition as determinations are made on where to send the detainees housed there.

In Guantanamo, Zaeef recalled, "there was no rule, no regulation for [treatment of] the detainees."

Sayed Sharif Yousofy, who works to get prisoners released from Bagram, said he would like to see both facilities closed.

"Some prisoners are released after four years without any conviction of a crime, which is not fair," he said. "These prisoners are not treated according to the convention of human rights, either in Guantanamo or Bagram."

Preliminary intelligence assessments show more than 14 percent of detainees released from Guantanamo either returned or are suspected of returning to terrorism, the Pentagon said earlier this week. Zaeef -- who was Afghanistan's ambassador to Pakistan under the Taliban regime at the time of the September 11, 2001, terrorist attacks on the United States -- said he believes the statistics, as detainees are often angry when released.

"Anyone in the world, to be deprived of any kind of human rights, any kind of justice -- he becomes angry, so he will try to get revenge," he said. While detained, he said, detainees sometimes lose everything -- homes, property, money -- and "they have nothing after that."

While he claims to no longer be a Taliban member, he said he supports the insurgents and believes the United States will never be victorious in Afghanistan. "There is no choice" for the Taliban except to fight, he said. "There is no other way for them."

"Ideologically, they [the U.S.] are failing" in Afghanistan, he said. "I think they are not able to win the war."