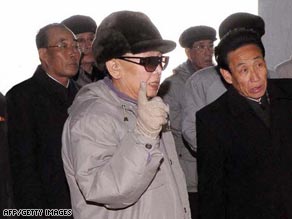 The agency cited a government official who said that the missile had been fired into the Sea of Japan, the latest in a series of tests that began two days ago.

North Korea's actions have heightened tensions in the international community, though U.S. officials made it clear that other nations will not be intimidated by the "provocative and destabilizing" missile tests, particularly the nuclear test on Monday.

A day later, North Korea fired two short-range missiles from its east coast in what one South Korean official called a continuation of the North's "saber-rattling," Yonhap reported.

After passing the non-binding statement of criticism, the Security Council is now working on passing "a strong resolution with teeth," Rice said.

"Those teeth could take various different forms -- there are economic levers, there are other levers that we might pursue," she said.

North Korea agreed in 2008 to scrap its nuclear weapons program -- which it said had produced enough plutonium for about seven atomic bombs -- in exchange for economic aid. But the deal foundered over verification and disclosure issues, and the North expelled international inspectors and announced plans to restart its main nuclear reactor.

Russia, France and Japan have signaled support for new sanctions against North Korea, already one of the most isolated nations in the world.

Monday's blast, conducted just before 10 a.m. (9 p.m. Sunday ET) showed up on seismographs with the punch of a magnitude 4.7 earthquake, according to the U.S. Geological Survey. Russia estimated the force of Monday's blast at 10 to 20 kilotons, in the neighborhood of the Hiroshima and Nagasaki bombs of World War II and far larger than the 2006 test.

Several analysts said the test could be an effort to improve Pyongyang's bargaining position, or a sign of a power struggle within North Korean leader Kim Jong-Il's government.

Han Park, a scholar at the University of Georgia, said North Korea wants normal diplomatic relations and a non-aggression pact with the United States -- and is "angry enough and hungry enough to sell anything they can put their hands on."

Analysts say North Korea is years from having a weapon it can put atop a long-range missile like those in the U.S., Chinese or Russian arsenals.

Meanwhile, Kim is widely reported to have suffered a stroke in August and has been absent from many public functions in recent months. In April, he named his son Kim Jong-un and brother-in-law, Jang Song Thaek, to the country's powerful National Defense Commission, suggesting his son might be his heir.

Rebecca Johnson, executive director of the Acronym Institute for Disarmament Diplomacy, told CNN that Kim "needs to demonstrate domestically that he is in charge."

North and South Korea technically remain at war, because no treaty formalized the truce that ended the Korean War in 1953. The conflict also involved China and the United States, and about 25,000 U.S. troops are still based in South Korea. But Johnson said renewed conflict is unlikely; rather, Pyongyang is "playing a political game."