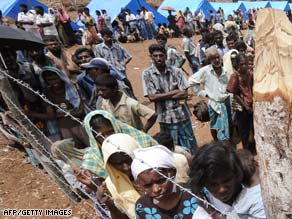 Displaced Sri Lankan people look out from inside a camp in Cheddikulam.

The call came from chief Jayantha Wickremaratne as government security forces and police pressed on in their search for rebel suspects in the capital, Colombo, its suburbs and principal towns.

After a 25-year civil war that led to an estimated 70,000 deaths, the Sri Lankan government has declared victory over the Tamil Tiger rebels.

About 9,100 rebel suspects have been rounded up from camps housing refugees from the northern Wanni region.

The fighting has created about 250,000 to 300,000 refugees in the country, according to humanitarian groups and U.N. figures.

On Saturday, U.N. Secretary General Ban Ki-moon visited some refugee camps. Shell-shocked and scarred inside and out, refugees huddle in tents, with water and medicine in short supply.

"I have traveled around the world and visited similar places, but this is by far the most appalling scenes I have seen," he said.

Ban requested that the United Nations be provided full access to the camps to provide aid.