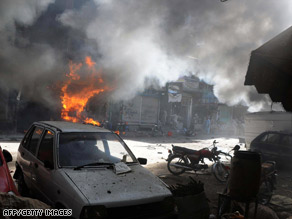 Smoke billows from a fire at the site of a marketplace bomb in Peshawar, Pakistan, on Thursday.

Peshawar is the capital of North West Frontier Province, an area where the military has launched a massive operation against Taliban militants.

Two children were among the dead, according to the district coordination officer of Peshawar District, Sahib Zada Muhammad Anis Khan.

Khan said at least 74 people were wounded in the attacks, which occurred about 5:45 p.m. in central Peshawar. The markets, Qissa Khawani and Kabari, are part of the larger Khyber Bazaar. The Kabari Bazaar sells DVDs, music cassettes and televisions.

After the bazaar attacks, several of the suspects fled to a rooftop where there was a gunbattle between them and police. Two of the suspected militants were killed, and two were taken into custody, police said.

Police recovered two suicide vests, and said they believe the attackers may have set off the explosions to lure more people to the area before detonating more explosives.

A few hours later, a policeman was killed in his patrol car on the outskirts of Peshawar when a vehicle containing explosives slammed into it, said Malik Naveed, Peshawar police inspector general. Three policemen were injured in the attack.

The latest victims -- a policeman and a civilian -- died in Dera Ismail Khan, the province's southernmost city, more than 250 kilometers (150 miles) from Peshawar. The officer died in an attack similar to the one outside Peshawar: A car carrying a bomb hit his vehicle, police said.

Police Officer Meeran Shah, who witnessed the attack, said the suicide car bomb exploded on a major road in front of a hospital and a government building. The vehicle drove into a combined military and police checkpoint at the entrance to the city before exploding. At least six people were wounded.

The attack in Lahore, in eastern Pakistan, also left more than 250 people wounded -- most of them police officers and staffers.

The militants vowed similar attacks in other cities.

Taliban Commander Hakimullah Mehsud said the Wednesday morning attack in Lahore was payback for the ongoing military offensive in the northwest part of the country, which has become a haven for Islamic militants.

The Taliban did not say the target was Inter-Services Intelligence, Pakistan's controversial spy agency, which has historic links with the Taliban.

Pakistan has long denied allegations that Inter-Services Intelligence supports the Taliban and other Islamist militant groups, including Lashkar-e-Tayyiba, which was blamed for the November attacks in Mumbai, India.

The Taliban has said the government's military operation in the northwest is meant to appease the United States, which has long asked Pakistan to battle insurgents operating from the stretch of tribal areas along the border with Afghanistan.

The United States says the militants have launched attacks on U.S.-led coalition and NATO troops across the border.