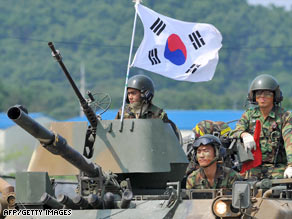 South Korean soldiers ride in armored vehicles during a drill Friday in the border city of Paju.

This activity is similar to that before a long-range missile launch by North Korea earlier this year. It comes amid growing world concern over North Korea's latest nuclear test and test-firings of short-range missiles.

North Korea test-fired a short-range missile Friday off the country's east coast, a South Korean military source said. It would be the sixth such missile test since the country conducted a nuclear test Monday.

Also Friday, North Korea upbraided the U.N. Security Council for slamming its nuclear test, calling the members of the body "hypocrites" and warning of "stronger self-defense countermeasures" as the world body considers more sanctions against the country.

"There is a limit to our patience," the Foreign Ministry said in a combative statement.

Watch how the U.S. is responding to the latest launch »

North Korea blasted the Security Council's condemnations of the nuclear test on Monday and the launch in April of what North Korea called a satellite but other countries called a long-range missile.

The North Korean actions are regarded as violations of Security Council Resolution 1718. Adopted in 2006 after North Korea conducted a nuclear test, the measure imposes sanctions Pyongyang and warns it should "not conduct any further nuclear test or launch of a ballistic missile."

North Korea agreed in 2008 to scrap its nuclear weapons program -- which it said had produced enough plutonium for about seven bombs -- in exchange for economic aid. But the deal foundered over verification and disclosure issues.

The Security Council has been working on a new and tougher resolution in response to the latest developments.

"If the U.N. Security Council will make further provocative actions, this will inevitably lead to the Democratic People's Republic of Korea's approach toward adopting stronger self-defensive counter-measures," the North Korean statement said.

The statement said Resolution 1718 was "fabricated" by "hypocrites."

"The recent nuclear test conducted by the Democratic People's Republic of Korea is the 2,054th one on the Earth. The five permanent members of the U.N. Security council have conducted 99.99 percent of all the nuclear tests," the statement said.

"Those countries have posed the biggest nuclear threats to the world."

Noting that it's not a signatory to the Nuclear Non-Proliferation Treaty or the Missile Technology Control Regime, North Korea said it "has a right to conduct as many nuclear tests or missile launches as it wants in the event that the supreme interests of the state are infringed upon."

Meanwhile, senior Obama administration officials said a high-level U.S. delegation is going to Asia for a series of "intensive consultations" on what North Korea's increasingly alarming behavior means for American security alliances in the region.

The goal, they said, is to persuade Pyongyang that going back to the negotiating table is the only option. North Korea has been negotiating over its nuclear program with the United States, Russia, China, Japan and South Korea in six-party talks.

Seriously complicating matters is the health of ailing North Korean leader Kim Jong Il. Officials have said nobody knows who is running North Korea, one of the most opaque and mysterious countries in the world. There is also no clear line of succession in place once Kim dies. iReport.com: A visit to North Korea

The last time the joint forces raised the "Watchcon" surveillance alert was after the 2006 North Korean nuclear test, according to South Korea's Yonhap News Agency.

"Additional intelligence assets, including personnel, will be deployed while reconnaissance operations over North Korea will increase," South Korean defense spokesman Won Tae-jae said, according to Yonhap. He declined to give specific details, the news agency said.

CNN's Barbara Starr in Washington contributed to this report.