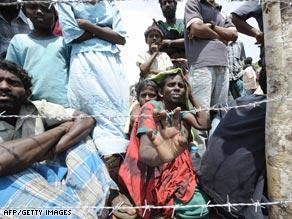 Refugees gather behind barbed wire at one of Sri Lanka's camps for those displaced by recent fighting.

The Times said it had acquired confidential U.N. documents that record nearly 7,000 civilian deaths in the no-fire zone up to the end of April. The toll then surged, the paper quoted unidentified U.N. sources as saying, with an average of 1,000 civilians killed each day until May 19, when the government declared victory over the Tamil Tiger rebels.

The United Nations has previously said 7,000 civilians were killed in fighting between January and May. A top Sri Lankan official called the 20,000 figure unfounded.

Gordon Weiss, a U.N. spokesman in Sri Lanka, told CNN that a large number of civilians were killed -- though he did not confirm the 20,000 figure.

"Up until a certain point, we had very good evidence to show that there were about 7,000 people that were killed," he said. "Then the intense battle kicked in and there were many more deaths, but we didn't know exactly how many.

"After this, our sources were not able to go out and check those figures. It was based on an extrapolation from what we had seen in the past and also judging from the number of dead bodies that were brought into the hospital."

The declaration of victory by Sri Lankan President Mahinda Rajapaksa brought an end to a 26-year civil war. The rebels began their fight for independence for the minority Tamils in July 1983, and since then, at least 70,000 people have died.

The fighting intensified at the start of the year. Government troops managed to pin the rebels to a small strip of land in the country's north, a conflict zone that trapped thousands of civilians.

Sri Lankan Foreign Secretary Palitha Kohona called the 20,000 figure "absolutely unfounded, with no basis of fact." He accused the newspaper of bias.

"The Times have been carrying on a campaign and has been using us," Kohona told CNN's Don Riddell. "Sri Lanka succeeded in eliminating a deadly terrorist group and we also rescued 260,000 hostages, and now The Times wants to turn the clock back and make the allegations, which are unfounded."

Sri Lanka will investigate the number and causes of civilian deaths, Kohona said.

"This is a country where the rule of law prevails and these matters will come out into the open as things settle down," he added.

U.N. Secretary-General Ban Ki-moon visited some of the Sri Lankan refugee camps on Saturday and said they were "by far the most appalling scenes I have seen."