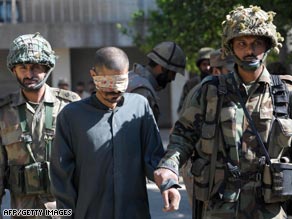 The clashes in South Waziristan were separate from an ongoing months-long military offensive in the Swat Valley.

Many analysts believe the army may launch an offensive to flush out militants from South Waziristan once it completes its campaign in Swat where the military claimed a major victory Saturday when it said its security forces had secured the key city of Mingora.

In the second clash, insurgents ambushed a military convoy in a village north of Wana. Ten militants were killed in the ensuing firefight. Three soldiers were also killed, Abbas said.

On Saturday, Pakistani military spokesman hailed the capture of Mingora, the largest city in the Swat Valley where security forces have been fighting the Taliban in a month-long offensive.


All About Taliban Movement of Pakistan • Pakistan