NEW DELHI, India (CNN) -- India's lower house of parliament elected a woman as its speaker Wednesday, a first in the male-dominated chamber's history. 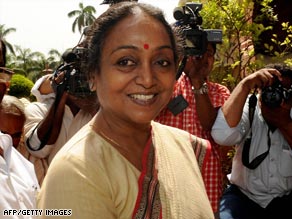 Meira Kumar was nominated by the ruling Congress party.

Meira Kumar is also a member of the "untouchable" Dalit class, the lowest rung in the centuries-old caste system in the country.

The speaker conducts the proceedings of the house. She will preside over 543 elected members, of which 58 are women.

Kumar, 64, was elected to the position unopposed. She was nominated by the ruling Congress party but also had the backing of the alliance led by the Hindu nationalist Bharatiya Janata Party.

Women play a prominent role in the politics of India, the world's largest democracy. The South Asian country of 1.1 billion people has a female president, Pratibha Devisingh Patil.

And four of the country's political parties, including the Congress Party, are led by women.

Hindus believe there are five main groups of people. The last group is the Dalits. They're considered impure and are often forced to work in menial jobs. They drink from separate wells and use different entry ways to come and go from buildings.

Dalits number about 250 million in India, about 25 percent of the population, according to the Colorado, U.S.-based Dalit Freedom Network.

India's constitution outlaws caste-based discrimination, and barriers have broken down in large cities. Prejudice, however, persists in some rural areas of the country.

All About India • Pratibha Patil