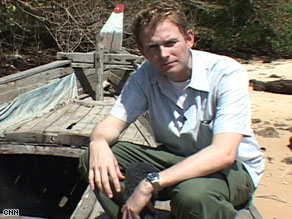 Dan Rivers: "This story underscores all the reasons why I became a journalist."

The winning half-hour documentary, presented by CNN's Bangkok-based correspondent Dan Rivers, highlighted the on-going persecution of the ethnic Rohingya people in their bid to escape terrible persecution and privation in Myanmar, formerly Burma, and in neighboring countries.

Jurors at Tuesday's award ceremony in London singled out CNN's entry for particular praise for putting the issue high on the agenda at an ensuing Southeast Asian summit meeting.

They said they were impressed by a brilliant investigation that broke new ground and secured a personal commitment to intervene from the Thai prime minister.

CNN International executive vice president and managing director Tony Maddox said: "This award is a tremendous reflection on the quality and depth of CNN's reporting, the tenacity, bravery and resourcefulness of our correspondent Dan Rivers and an endorsement of the network's strategy to own and create more content.

"It is a testament to CNN's London-based managing editor Deborah Rayner and the World's Untold Stories team in Atlanta that only the third edition of the documentary series, produced by CNN International, has won such a prestigious award so soon," he added.

The allegations of mistreatment of the Rohingya in the neighboring country of Thailand -- at the hands of the military -- prompted a government inquiry.

Thai PM Abhisit Vejjajiva later told CNN in an exclusive interview with Rivers that he would bring those responsible to account.

The haunting pictures of Thai soldiers towing boatloads of Rohingya and cutting them adrift on the high seas -- first broadcast on CNN's World's Untold Stories -- are one of the iconic images of 2009 and are credited with bringing the practice to worldwide attention.

"This story underscores all the reasons why I became a journalist," said Rivers. "It's about getting the facts and using those facts to engage an audience and make a difference."

Amnesty International UK Director Kate Allen, paid tribute to the winners for bringing human rights abuses to the world's attention. She said: "In the midst of the world financial crisis it is more important than ever to celebrate the achievements of journalists whose outstanding reporting has helped throw a clear light upon human rights abuses.

"Not only is the crisis itself having an impact upon people's human rights, there is also a real threat to investigative journalism as media outlets cut costs and reduce staff."