(CNN) -- The eldest son of North Korean leader Kim Jong Il, in a rare television interview Tuesday, shed some light on who might eventually take over leadership of the country. 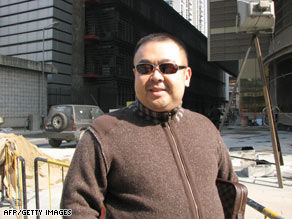 Kim Jong Nam told TV Asahi in Macau that he does not care about politics or succeeding his father.

The rules governing transfer of power in the secretive communist nation are unclear.

Kim Jong Il rules without challenge and has built a cult of personality around himself and his family.

He is widely reported to have suffered a stroke in August and has been absent from many public functions in recent months.

In April, he named his son Kim Jong Un and brother-in-law, Jang Song Thaek, to the country's powerful National Defense Commission, suggesting his third son may be his heir.

"I hear that news in the media," Kim Jong Nam said. "I think it's true ... however, it is my father's decision. So once he decides, we have to support him." iReport.com: How should the U.S. approach North Korea?

There has been speculation that Kim Jong Nam would defect from North Korea and that a purge of his supporters was under way. He told Asahi he saw no reason for leaving his homeland.