ISLAMABAD, Pakistan (CNN) -- Pakistani authorities have lowered the toll of victims killed from Tuesday's suicide attack at a hotel in Peshawar to nine. 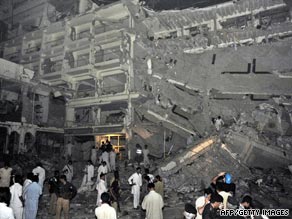 Pakistani police gather at the five-star hotel destroyed by a car bomb.

Police said Wednesday that the death toll of victims had risen to 17, but later in the day, officials lowered the toll to nine.

The figures do not include the three suicide attackers who also died.

Another 52 people were injured in the attack on the Pearl Continental Hotel, according to the new figures confirmed by Peshawar district coordination officer Sahibzada Muhammad Anis Khan.

The attackers shot their way onto the grounds of the Pearl Continental Hotel, which is often frequented by foreigners and diplomats, and set off a vehicle bomb Tuesday night.

Watch why the hotel is of significance »

Among the dead were two U.N. employees and the hotel's general manager.

The blast inflicted severe damage on the building, which is surrounded by a security wall, and destroyed dozens of cars in the parking lot, police and witnesses said. The chief of Peshawar's bomb-disposal squad said the bomb contained about 500 kilograms (1,100 pounds) of explosives.

Surveillance video appeared to show a car and a truck involved in the attack, getting through the hotel's outside gate and security checkpoint with relative ease.

"They tried their best to stop the car bomb," said Jamil Kharwar, a spokesman for the hotel. "When a person has in his mind to come to die, nobody can stop him."

Peshawar is the capital of North West Frontier Province, which has suffered a spate of bombings on civilian targets in the wake of the Pakistani military's ongoing military offensive against Taliban militants. Sajjan Gohel, an international security analyst at the Asia-Pacific Foundation in Britain, said the blast appeared to be a response to the government's offensive.

"It has been criticized very heavily in the tribal areas because of the fact that the Pakistani military has been using helicopter gunships against the Taliban, which has resulted in very high civilian casualties," Gohel said.

He said people in the region are sympathetic to the Taliban, the Islamic militia that ruled most of Afghanistan before the September 2001 attacks on New York and Washington by its al Qaeda allies.

"This is where winning hearts and minds is so key and important, which the military are failing to do," he said.

However, hundreds of Pakistani villagers who have formed an anti-Taliban militia are currently fighting to remove the Islamic militants from their region of northwestern Pakistan, military spokesman Maj. Gen. Athar Abbas told CNN.

Abbas told CNN the Pakistani military is supporting the villagers, who turned against the Taliban after a suicide attack on a local mosque during Friday prayers that left at least 40 dead.

Some Peshawar officials blame militants for the attack, saying the country is at war. "Terrorists" are responsible, said Bashir Ahmad Bilour, a senior minister in North West Frontier Province.

"We have decided it's do or die, either they live or we live," he said.

The Pearl Continental is owned by the same group as the Marriott Hotel in Islamabad, which was destroyed in a suicide truck bombing in September.

The U.S. government had been considering moving its consulate in Peshawar to the hotel, U.S. envoy Richard Holbrooke said Wednesday. A U.S. Embassy official said though that no embassy employees were registered at the hotel.

CNN's Ingrid Formanek and Reza Sayah contributed to this report