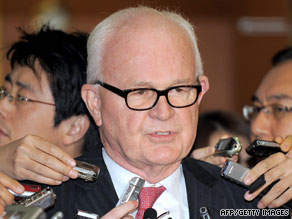 The draft resolution reaffirms that the "proliferation of nuclear, chemical and biological weapons, as well as their means of delivery, constitutes a threat to international peace and security."

The entire council may vote Thursday or Friday on the proposal to expand and tighten sanctions on North Korea, two senior Western diplomats at the United Nations said.

"Today we tabled a draft resolution to be considered by all colleagues on the Security Council which we think provides (a) strong, very credible, very appropriate response to the provocative nuclear test that North Korea launched and its subsequent activities," Susan E. Rice, U.S. ambassador to the United Nation, told reporters.

"And we think that the message that the council will send, should it adopt this resolution, is that North Korea's behavior is unacceptable, they must pay a price, they ought to return without conditions to a process of negotiations and that the consequences they will face are significant," Rice said.

The draft imposes an embargo on the shipment of arms from the communist regime and broadens a ban on the import of weapons.

It would require states to "exercise vigilance" over the direct or indirect supply, sale or transfer to North Korea of small arms or light weapons.

A new regulation would prohibit nations from providing bunkering services, such as fuel, to North Korean ships believed to be carrying contraband. The draft broadens authority to prevent the flow of funds that could benefit North Korea's missile, nuclear or proliferation activities.

The agreement comes amid rising tension with North Korea, which recently conducted a nuclear test, fired test rockets and threatened U.S. and South Korean ships near its territorial waters. The nuclear test and the firing of six short-range rockets came in late May.

The permanent members -- China, France, Russia, Britain and the United States -- reached the agreement in consultation with Japan and South Korea.

Adding another wrinkle to the situation, two U.S. journalists arrested in North Korea were convicted Monday of illegal entry to the country and sentenced to 12 years in prison.

That test, in April, showed a significant improvement in range from North Korea's initial long-range missile test in 2006.

Washington officials have said the United States' goal is for North Korea to return to nuclear negotiations with the United States, China, South Korea, Japan and Russia, known as the "six-party talks."