(CNN) -- The number of uprooted people across the world dropped slightly last year, but new displacement this year in conflict zones like Pakistan, Somalia and Sri Lanka so far "has already more than offset the decline," the U.N. refugee agency said Tuesday. 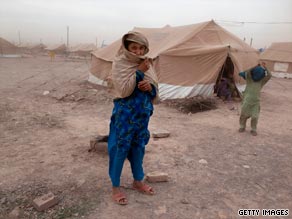 "Today, we are seeing a relentless series of internal conflicts that are generating millions of uprooted people," U.N. High Commissioner for Refugees Antonio Guterres said in a news release.

This is one of the main points in Global Trends, an annual report by the U.N. agency on developments regarding refugees, internally displaced people, asylum seekers and stateless people.

"While some displacements may be short-lived, others can take years and even decades to resolve. We continue to face several longer-term internal displacement situations in places like Colombia, Iraq, the Democratic Republic of the Congo and Somalia. Each of these conflicts has also generated refugees who flee beyond their borders."

The number of refugees and internally displaced people who returned home in 2008 was around 2 million, a decline from 2007, the report said.

Refugee repatriation, which was 604,000, was down 17 percent. Displaced people's returns were down by 34 percent at 1.4 million people.

"Traditionally the largest durable solution for refugees, it was the second-lowest repatriation total in 15 years," the report said. "The decline in part reflects deteriorating security conditions, namely in Afghanistan and Sudan."

The report listed other statistics and trends in 2008: