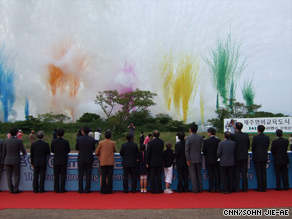 Definition: A father who sends his wife and kids abroad to study English and only flies to see them during winter and summer vacations.

Definition: A geese father who is rich enough so he can swoop in to see his family any time he wants.

Definition: A geese father who is too poor to fly. He can only yearningly gaze into the direction of his family.

With a big bang, the groundbreaking for an ambitious new project on the South Korean island of Jeju got under way last week, a project that hopes to make these "geese" nouns obsolete.

The central idea is relatively simple. More than US $1.3 billion will be poured into creating a city where elementary schools, middle and high schools, and ultimately universities, will be taught almost entirely in English.

Top-notch schools outside of South Korea are jumping in, one of the first being Britain's North London Collegiate School.

And while the location will be in Jeju, organizers say the curriculum, except for Korean language and history, will all be taught in English and be identical to that being taught at the institute's headquarters.

More than 9,000 students are expected to participate.

Officially, English is taught from the third grade here. But many Koreans believe in an early start. There are even popular Internet sites that offer recorded English language songs and stories for the fetus.

There is also an overwhelming belief that the English taught in the public school system is not good enough. Even that the vast number of English private institutes are not up to par. That leaves many South Korean parents little choice but to send their children overseas.

Official statistics say that as of 2007, more than 27,000 South Korean high, middle and even elementary school students were studying abroad.

A government survey done last year says nearly half of all South Korean parents wanted to send their children abroad.

One such parent was National Assemblyman Song Young-Gil, who made one of the opening speeches at the groundbreaking ceremony for the Jeju Global Education City.

Because he represented a neighborhood in Seoul, Song could not send his children overseas without seeming to abandon his voter base.

"I always felt guilty because my children were not getting the English education that other people were getting because of me."

He also saw how the geese father phenomenon was breaking up families, and creating social problems. There have been many media reports about divorces, and even suicides among the lonely fathers.

So when the government of Jeju Island asked him to support their project, Song said he gladly said yes.

Jeju officials say the tuition will be somewhere between US$3,100 to US$4,700. About half the amount South Korean parents would be paying to send their children overseas.

But Jeju is eying something bigger than just the Korean market. The future vision is targeting the entire northeast Asian population: Japanese and Chinese as well as South Korean children.

"Potentially there are 750 million people that live within a two-hour flight time radius of Jeju," says Christopher Bogden, the project manager for the Jeju Global Education City.

Jeju is already a popular destination for Japanese and Chinese tourists. The tropical climate and natural beauty of the island is a major draw. And the island has recently attracted foreign investors who are seeking to cultivate the island's assets.

But the project also has some worried. The lucrative English language market in Korea has already resulted in a total of 21 "English villages" across the country. And more are popping up. Next month, an English village capable of schooling some 5,000 children will open in the southern city of Keoje.

The concern is that the Jeju project will become just "one of the many." And that it will be difficult for the provincial government to recoup their investment, especially in this slow global economy.

But the Jeju officials are confident that the project will distinguish itself because it encompasses not just schools, but residential and commercial facilities, all using English language to enhance the immersion experience.

The first stage -- comprising one each of an elementary, middle and high school -- will be ready to accept students from 2011, and the entire complex is scheduled to be complete in 2015. Organizers say that will be more than enough time for the global economy to recover and the demand for quality English education in Asia to flourish.

That's good news for all geese fathers in South Korea.

All About South Korea