NEW DELHI, India (CNN) -- Religious groups in India have warned they will oppose any move to legalize homosexuality as the federal government prepares to hold talks on a law that classifies same-sex acts as crimes. 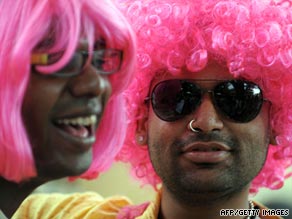 An Indian gay activist participates in a gay pride march in Bangalore on Sunday.

India's Hindu nationalist main opposition has in the meantime called for a national debate on the legislation that law minister M. Veerappa Moily last week said would come up for a discussion within the government.

"This is a sensitive issue and warrants a debate within the Indian society at large before arriving at any decision," said Sidharth Nath Singh, spokesman for the opposition Bharatiya Janata Party.

An Indian court is due to give its judgment on a petition filed by a nonprofit group that has challenged the anti-gay provision of the penal code.

In a news conference last week, Moily refused to spell out his government's stand on it because it awaits judicial determination. But his comments that the federal home minister was "contemplating" a meeting with his Cabinet colleagues on the law drew widespread coverage in the largely conservative country.

"Hope floats at rainbow parades," read a caption on a front-page picture from a gay parade in New Delhi in Monday's Times of India newspaper.

Participants in that march demanded repeal of Section 377 of the penal code, which criminalizes private consensual sex between adults of the same gender in the country.

Watch a New Delhi march in support of gay rights »

Religious leaders, however, oppose any suggestion to scrap 377, describing homosexuality as "unnatural."

"We are against calling homosexuality a criminal activity, but we are certainly in principle against legalizing it, because that would mean the state endorsing same-sex relationships," said Babu Joseph, spokesman for the Catholic Bishops' Conference of India.

Homosexuality "violates fundamental norms of a family," he said.

In his remarks, Kamal Faruqui of India's Muslim Personal Law Board outlined what he said was Islam's position on same-sex unions.

"Islam is totally against it. Islam does not allow any unnatural act. No Muslim in the world, let alone India, can ever support it," Faruqui said.

"Homosexuality is unnatural," said Sukhdev Singh Bhaur, general secretary of the Shiromani Gurdwara Parbandhak Committee, which administers historical Sikh shrines, mainly in Punjab state. "We oppose any proposal to give legitimacy to such acts," Bhaur added.