TOKYO, Japan (CNN) -- Even in the midst of Japan's deepest economic recession since World War II, the country's love hotel industry is thriving. 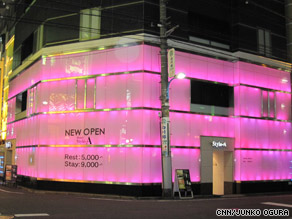 The Style A hotel in Tokyo offers amenities.

"I'd hate to use the term "recession-proof," but it's certainly proven very resilient over the last six to nine months," said Steve Mansfield, CEO of New Perspectives, which operates six love, or "leisure," hotels in Japan.

One of them, the Bonita Hotel in Isawa, boasts a 257 percent occupancy rate. Rooms can be rented for three to 24 hours.

Mansfield's company estimates the industry in Japan pulls in $40 billion a year in revenue.

"It's a natural human desire. Even these days, on the weekend, every love hotel is full of people -- it's hard to get in. You can never stop sexual desire," said a woman with her boyfriend in Tokyo, who laughed in embarrassment when asked for her name.

Watch Morgan Neill's report from inside a love hotel »

Though required by law to have a front desk, most can be rented and entered without talking to a clerk.

The days of Japanese being ashamed to enter love hotels are coming to an end, though, Mansfield said.

"Seventy-five percent of our guests are members of our points program," he said. "They carry our points cards, they collect points and they receive gifts. That's something people are very comfortable with, and I think that reflects the customers that we attract."

"The bad image that love hotels had has faded over time. Also, customers started to raise their voices and became more selective about choosing hotels. In response, management has improved."

The flashiest love hotels are found in Osaka, including a Hello Kitty-themed hotel and one with a room featuring a merry-go-round.

Tokyo hotels tend to be tamer, focused on winning customers with amenities. The Style A Hotel, for example, offers a suite for $190 that includes a full-size Jacuzzi and a private sauna.

Though young couples make up the majority of customers, they are not the only ones. One man, who declined to be named, said: "I go to love hotels when I'm drunk and don't feel like going home."

Whatever the reasons, the hotels have been doing well enough that Mansfield recently went to London, seeking investors to expand.

"The industry has 25,000 hotels, and through our research we've worked out that 90 percent of owners have five or fewer hotels," he said.

That fragmentation is a structural inefficiency in the market, he said, one he would like to help correct.

All About Japan • Tokyo • Culture and Lifestyle