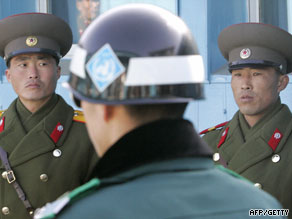 N. Korean army soldiers, back, look at a S. Korean soldier, center, in the demilitarized zone in June.

The missiles were apparently Scud-type, estimated to have a range of about 500 kilometers (310 miles), according to South Korea's Yonhap news agency.

South Korean intelligence estimates that North Korea has about 700 such missiles in its arsenal.

South Korea called the launches a provocative act, according to a government statement.

North Korea had issued a warning to mariners to avoid an area in the Sea of Japan at certain times between June 24 and July 9 because of a "military firing exercise," according to a U.S. military communication about the warning provided to CNN.

The recent firings come amid heightened tensions on the Korean peninsula. North Korea conducted a nuclear test in May, fired test rockets and threatened U.S. and South Korean ships near its territorial waters.

The first two missiles were fired about 8 a.m. and 8:30 a.m., Yonhap reported. Another missile was launched about 10:45 a.m., the agency reported. A fourth one came some time after that.

The U.S. Navy and other U.S. officials said they are ready to track any missiles.

"The United States is aware of possible missile launches by North Korea. We are closely monitoring North Korea's activities and intentions," a U.S. official said.

"This type of North Korea behavior is not helpful. What North Korea needs to do is fulfill its international obligations and commitments."

Earlier this week analyst Daniel Pinkston said the reported test might be training for a future test but it could also just be a routine military exercise.

CNN's Sohn Jie-Ah in Seoul, Korea, and Charley Keyes in Washington, D.C., contributed to this report