KABUL, Afghanistan (CNN) -- International troops in Afghanistan endured another deadly attack Tuesday, a day after 10 NATO-led troops were killed in that country. 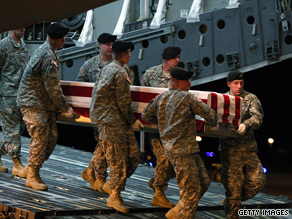 The body of a U.S. soldier killed in Afghanistan arrives in the United States on Monday.

A U.S. coalition service member "died as a result of injuries" on Tuesday afternoon in a roadside bombing attack on a convoy in western Afghanistan, the U.S. military said.

This follows 10 NATO-led deaths on Monday, the highest single-day total in Afghanistan in nearly a year, according to NATO and U.S.-led coalition numbers.

A month before that, 10 American troops were killed in two separate incidents on July 13, 2008.

The latest deaths came as U.S. troops cranked up their fight against the Taliban, a push that includes a major Marine-led offensive against the militants in the southern province of Helmand.

A seventh American died in an insurgent attack in eastern Afghanistan, ISAF confirmed.

Two Canadian air crew members and a British soldier were killed when a helicopter crashed during takeoff in Zabul province, the Canadian and British defense ministries said.

All About Afghanistan • The Taliban • NATO