HONG KONG, China (CNN) -- A plastic bag levy, a total indoor smoking ban and skyscrapers shutting the lights off? There has been a flurry of environmentally-friendly activity in Hong Kong over the past few weeks. 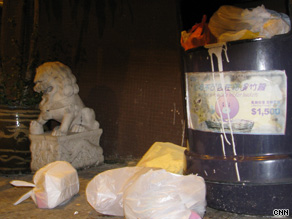 Piles of plastic bags are a common sight on street corners in Hong Kong.

Tuesday marked the beginning of the environmental levy on plastic bags. For every plastic bag a customer takes at certain retail outlets, they will be charged 50 Hong Kong cents (US$0.06). Green signs have sprouted up at these outlets to inform shoppers of the new fee.

The previous week, a full ban on indoor smoking in public places came into effect. Bars, nightclubs, massage businesses and mahjong-tin kau (Chinese dominoes) premises that had earlier received an extended deferment of the ban are now forced to implement it.

And in late June, more than 3,500 buildings and groups in the southern Chinese enclave turned out the lights on a skyline known around the world for its nighttime illumination.

What is going on here? Is Hong Kong, a city that is often shrouded in smog, getting eco-serious or eco-trendy? What do you think? Sound Off below

In a city where piles of plastic bags on street corners are not uncommon -- even being accosted by them while frolicking in the sea here is not unusual -- and smoking goes hand in hand with a beer or Cosmopolitan martini, I was pleasantly surprised by the moves.

Secretary for Food and Health Dr. Yok Chow said earlier this year that tobacco "remains the major attributable factor to the top five leading causes of death in Hong Kong" and claims some 6,900 lives here yearly.

A stroll on Monday through one of the city's popular nighttime and commercial neighborhoods not only revealed the usual plastic bag mess, but also smokers puffing away in bars.

At some bars, management set up ashtrays the size of kitchen garbage cans on the sidewalks for their customers to smoke one step outside the venue.

When I spoke with staff at three different places, one said she was unsure about the requirements of the new law, another said smoking just outside the venue was fine (as long as it didn't bother anyone else) and a third told me I could actually smoke inside the bar by open windows.

I spoke with the head of the Tobacco Control Office, which has 85 officers on the team who perform unannounced inspections and look into complaints. He told me that venues were not fined for violations -- but violators could be hit with fines of up to $5,000 HK dollars ($645).

"The venue managers themselves do not have any accountability or punishment that will be imposed on them, even if they do not enforce the law. In a way, it's a bit different from overseas legislation," Lam said. "What we are working on is a kind of a collaboration -- on one hand we try to engage the venue managers to support us, on the other hand we want to emphasize the role of education and publicity."

The efforts are promising, but I fear old habits die hard and wonder about Hong Kong's commitment to improving the environment for its residents.

As for me, I will carry a cloth bag for groceries and the Tobacco Control hotline number in my mobile phone to do my part to help make this city eco-serious.