SEOUL, South Korea (CNN) -- Donating to charity itself is a relatively new phenomenon in a society that traditionally values family units. 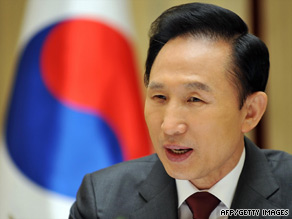 President Lee Myung-Bak is criticized by opposition parties who say he supports policies that favor the rich.

So the announcement that South Korean President Lee Myung-Bak will be donating $26 million, the bulk of his wealth, to charity, is considered highly unusual.

The president's office said the money will be used to set up a new youth scholarship program.

"My fortune, which I accumulated through hard work during my life, is very precious to me," said Lee in a statement. "I have long thought that it would be good if my wealth was spent for society in a valuable way."

Lee, who came to office last February, promised to donate his personal wealth to society in late 2007 when he was accused of amassing his fortune through illegal means. He was since been cleared of all charges.

But he is now facing criticism from opposition parties who say he supports policies that favor the rich.

Lee is a former CEO of Hyundai Construction and the Seoul mayor.

But he emphasizes his impoverished beginnings, as a poor young man who had to earn his college tuition cleaning streets.

"Looking back, I realize that all of those who helped me were poor," said Lee in the statement. "I know that the best way for me to pay back such kindness is to give back to society what I earned."

Analysts say this move will hopefully encourage many others to follow.

All About Lee Myung-bak • South Korea