Roadside bombs 'No. 1 threat' to troops in Afghanistan

WASHINGTON (CNN) -- Insurgents' use of roadside bombs has increased dramatically in Afghanistan this year, according to Pentagon statistics, and the United States' top military official is calling them the "No. 1 threat" to troops there. 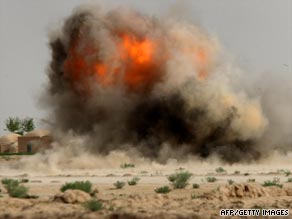 An IED is exploded by U.S. Marines near the remote village of Baqwa, Afghanistan, in March.

In June there were 736 incidents in Afghanistan involving roadside bombs, called improvised explosive devices or IEDs, and 82 "effective attacks," ones that caused casualties among coalition forces, the figures show.

That was up from 263 incidents and 25 effective attacks in February, with the numbers increasing each month, said the Pentagon's Joint Improvised Explosive Device Defeat Organization, an agency dedicated to thwarting roadside bombs.

The number of coalition forces killed and wounded by such bombs has climbed, though not steadily, from 18 killed and 33 wounded in February to 23 killed and 166 wounded in June, the agency said.

No numbers were provided for July, but such attacks have continued this month. In the latest, roadside bombs killed two NATO-led troops on Thursday, one in eastern Afghanistan and the other in southern Afghanistan.

The military has called IEDs the weapon of choice for insurgents in that country.

And at the National Press Club on Wednesday, Adm. Mike Mullen, chairman of the Joint Chiefs of Staff, said in response to a reporter's question that the biggest threat to coalition troops in Afghanistan is improvised explosive devices.

All About Afghanistan War • Insurgencies